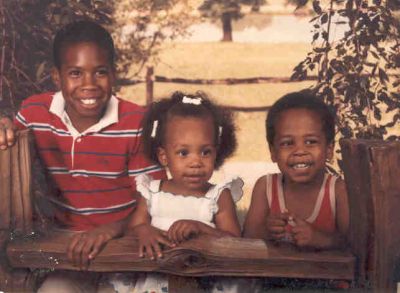 20 years ago my brother, my sister and I took pictures at Olan Mills Portrait Studio. I was 13, my brother was 3 and my sister was 2. Now, going to Olan Mills wasn’t something that we had the option of doing, this is something that we had to do. It was all about getting dressed up, piling into the car and heading to the picture place to take the photos that can be put over the family fireplace. Now I know we’re not the only ones who had to do this. I’m sure that the name Olan Mills all by itself brings laughs and stories from a lotta folks out there. Back then people weren’t going to Sears, JC Penney, Walmart, or the Picture People to take their portraits. Back then EVERYBODY went to Olan Mills. Anyway, for Christmas this year we all decided that we needed to take a new picture for Ma (mom for you out there who like to speak properly). However, between all of us our schedules, we knew it would be nearly impossible to get to a studio to take a picture in time for Christmas. So baby brother had a bright idea. Why don’t we all just meet at a location and have pictures taken with his 35mm camera. Now, that sounded kinda cheesy to me, but at that point I figured it would probably be the best option. The question was, where would we go to take the photos??? After a short debate, we all agreed to meet at my house. Now that we had the location covered, we had to decide where in the house to take the pics. Well, I remembered that I had this 10 feet by 10 feet piece of black suede drape in my basement. It was something that a lot of hotels use for events and I had picked it up a few years back cuz the Hyatt hotel was throwing it away and I liked using pieces of it to buff my car when I waxed it. So in essence it was really about 8 feet by 10 feet once you subtract the pieces that I had cut, but anyway.

The Thursday night before Christmas we met at my house and the fun began. First off, my brother thought he’d just set up the camera on a tripod and set the camera to automatically take the pictures, but I protested against that idea. It didn’t make sense to me to do that cuz then we’d really have a bunch of pictures that looked messed up. So he decided to bring a friend along to take the pics of us. We neatly hung the black suede drape over the basement door and living room closet door to spread it out evenly along the wall. Then I grabbed a stool from the kitchen. For the next 10 minutes or so, we took turns sitting and posing in the chair while the other 2 would stand alongside. Then we all stood up and took pics, then we all sat down on the couch and took more pics. The whole experience was kinda fun. We had no clue how the pics would turn out, but were sure that at least one good pic had to come from the lot.

The next day my brother took the film to Costco to have it developed. I met him at the photo lab there that afternoon so that we could choose the best pic to enlarge and place in a frame for Ma. We decided upon one, but I saw two others that were really nice and decided to enlarge those also. Throughout the process of selecting the right photos I said to myself “I know my sister is not gonna like the ones we chose”. Not that they were bad, but she always seems to hate the ones that I always like. Anyway, on Christmas Eve my brother picked up the finished enlargements. He put the 8×10 photo in one frame and I put the 2 5×7 photos in the frames that I had bought. I spent Christmas morning going through all of the pics that all three of us had taken together and I put those photos in an album for Ma as well. I arranged them chronologically by date and there were probably 40 pics total that ended up in the book. It was kind of a pictorial history of the kids that I knew she would love.

When it was time to open the gifts, we all know that Ma was surprised to see the newest photos. I looked at her and said “You know that you’re sitting in the portrait studio right?” and my brother, sister and I just laughed. Anyway, I figured I’d take some of the outtakes from the photos we took and make an online collage. So, here’s a few of em. 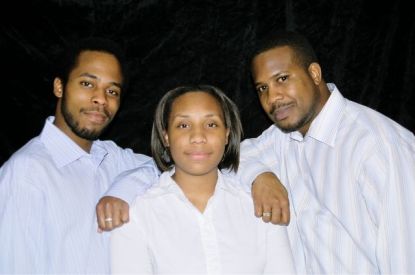 the rest of the pics can be viewed here… just click