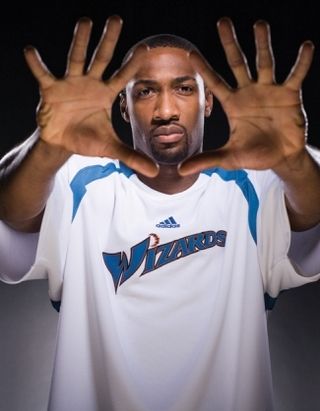 For those of y’all who have no clue as to who Agent Zero is, that would be the Wizards’ All Star guard Gilbert Arenas. Gil has brought a lot of life and excitement to the Wizards and to pro basketball in DC. Most know that I’m a die hard Celtics fan, but I’m a long time Bullets fan as well. Being born and raised in the DC area, I used to attend tons of games when my pops worked at Capital Centre. The whole Celtics thing came along when I visited my grandparents in Boston during winter breaks from school and went to the Boston Garden. I sort’ve fell in love with Celtics guard Nate “Tiny” Archibald and his playing style. Thus the Celtics became my 1a and the Bullets became my 1b. I’m a fan of both teams. 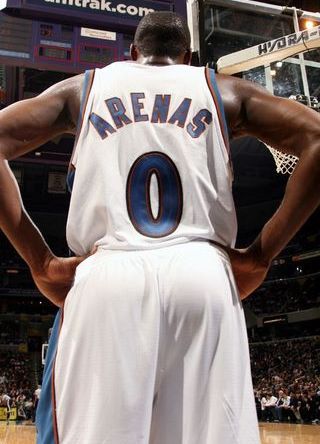 Anyway, the Bullets became the Wizards (still hate that name… thanks Abe) in ’97 and since that time I’ve attended at least a hundred games. I’ve watched a lot of players over the years play here in DC, but none really have had the flair of Gilbert Arenas. If you’ve never had the occasion to watch him play, you’re missing out. The kid is incredible. More often than not the past 2+ years, my fiancé attends the games with me and is a fan of the home team and Agent Zero. Anyway, a few weeks ago an opportunity presented itself that rarely happens in life. Now, I cannot go into specific details of what occurred because I have been sworn to never reveal that information. However, I was able to get an Arenas Wizards jersey signed and personalized by Gilbert for my fiancé and also a signed Adidas Gil Zero shoe in her size. I know she’s gonna read this and probably ask me again how I got it, but now I’m on record officially stating that I’ll never tell… okay sweetie? To folks who may have even the slightest clue or my partners who I’ve talked to, who really know the story about how I got this, don’t make any comments on here aiiiight? Thanks.

pics of personalization altered to protect the privacy of the woman in my life…. 🙂 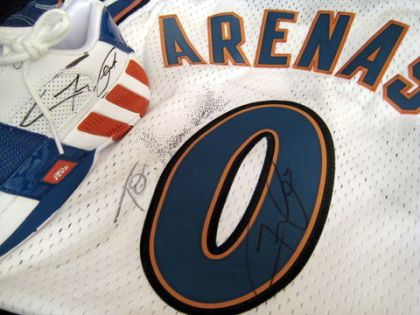 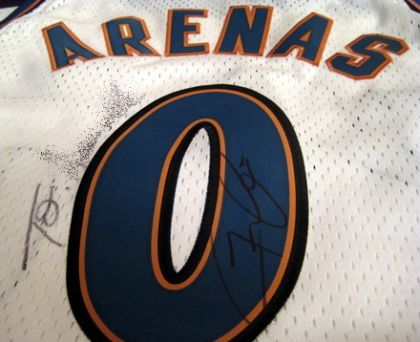 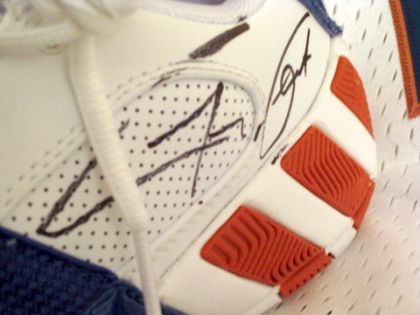 I’m canvassing memorabilia shops now to find a frame for the jersey and a special Plexiglas type box for the sneaker. It’s not often that you get an opportunity to meet your favorite celeb or athlete. Although I was unable to arrange that one, I was able to get something that I knew she’d enjoy receiving. I’m working on the other aspects though. I got a few folks in high places who still owe me favors, so we’ll see how that shakes out. Say Gil, if you’re reading this and can hook a brotha up for some courtside seats for the Wizards-Celtics game on Jan 12 at Verizon Center, I’d greatly appreciate it. If not, I’ll find a way somehow to get em. I can’t really offer you nothing cuz you got everything you need. But they’ll be a beautiful young lady sitting courtside cheering and clapping for every single play you make during the game.

Just wondering if anyone else has been lucky enough to have received something personalized from their favorite celeb, athlete, congressman, or whoever.

7 thoughts on “Agent Zero looked out for a brotha”