Taking that from Frankie Beverly & Maze who I checked out this past weekend in Baltimore before the winds and the rains hit.

Anyway, let me figure out where to start this entry. I suppose I’ll start with Las Vegas. I was in Las Vegas for an entire week attending Infocomm which is the largest gathering of audio-visual professionals in the world. For those who don’t pay attention or could really care less, that’s what I do. I run the A/V Operations for a very large organization based in the DC area that has over 20,000 members worldwide.

Anyway, I got to Vegas on Saturday and it was hot. I mean REAL hot… like 105 degrees. I’m gonna be real brief with the recaps cuz #1 I can be long winded and #2 some time has gone by and I’ve probably forgotten some of the stuff I did.

Sat: Got there. It was hot. Checked into my room at Ceasars. Enjoyed the view for about 3 seconds. Took a long nap. Woke up at 3am. Walked outside in the heat. Ran into my man Quilly at the the club Tao at the Venetian. He bounced, but we agreed to hook-up sometime while we were in Vegas. I was real hungry. Ate at Denny’s. Went back to room and slept.

Sun: Did nothing but watch TV and surf the web. Went to ESPN solo to watch the end of the US Open and Celtics-Lakers game. Ran up a real nice tab over 5 hours there. Celtics lost. Quilly called and said they were rollin’ to Body English. I wasn’t in the mood to hang out. Went to room and slept. Woke up to find out on the news that Raiders WR Javon Walker had got jacked up after being at Body English the night before poppin’ bottles.

Mon: Hooked up with Quilly. We sat down, ate breakfast at some cafe in Harrah’s casino and we talked for a while. He had a flight to catch and rolled, but left me some Grey Goose and cranberry juice. 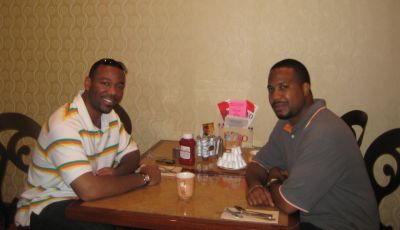 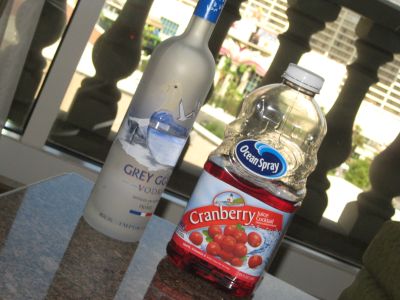 Went back to room and watched Tiger win the US Open. Went to sleep. Woke-up and met my man Wil at Cheesecake Factory. Kicked it with him for a while. Back to room at reasonable hour since I had a class at 8am the next morning.

Tue: Hot!!! I was sweating more than R. Kelly in a kindergarten class. Missed the conference shuttle and had to catch the monorail to the LV Convention Center.

Looked around and realized I was overdressed. I had on black slacks, a polo shirt and some dress shoes. Lotta folks had on shorts, tennis shoes and t-shirts. Sat in a class all day on new technology and trends in the industry. Wealth of knowledge, but got redundant. Ran into my man B in the class. We know each other from WKYS in DC since we both worked there. We agreed to hang out that night for the game. B scooped me up in his rental and we rolled to ESPN Zone. Got there. No seats. Was standing in line next to a dude who looked like Spike Lee. He was a Celtics fan too. I called him Spike all night too. Only at the end of the night did I ask him his name. 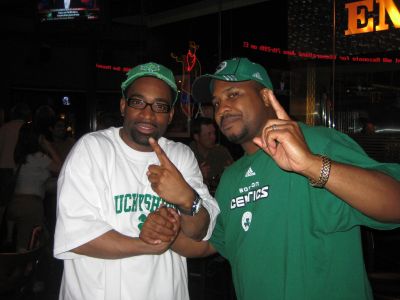 We sat at the bar all night and partying as the Celtics smashed the Lakers and won NBA #17. I acted a straight fool all night. Taunting folks. Hollering. Screaming. Lovin’ life. We were taking pics with ere’body who was a Celtics fan. I mean, folks from 8-88. White, Black, it didn’t matter. A brotha was joyous. 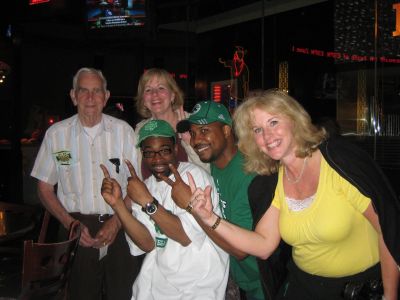 Left from there and was high fivin ere’body I saw on the strip in Celtics gear until….. I came upon about 15 Cypress Hill lookin’ guys all with Laker jerseys on. I toned it down a bit, gave them a head nod and threw up the peace sign. Walked by them and continued the festivities. I aint no fool. Won’t be no videos of me being beat down on YouTube. I partied til about 2am and went back to the room and crashed. I’ll never disclose how much was bet on the game. Let’s just say that I called Celtics in Game Six since March. That was even before the playoffs started. Talk about a premonition. You see that? That’s the big sparkling smile on my face!!!! 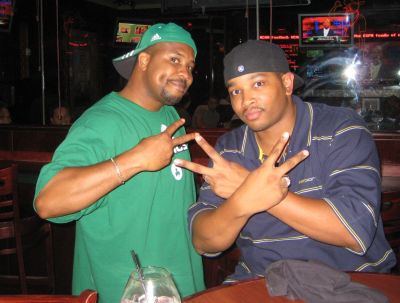 Wed: Expo opened. Met with some vendors from major companies. 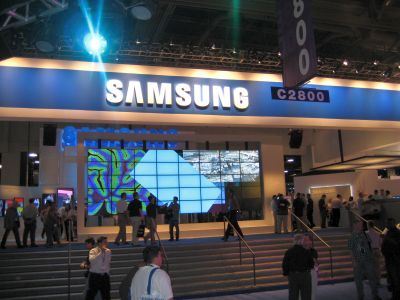 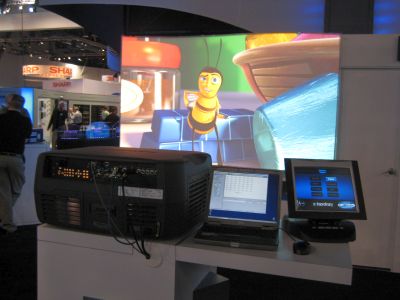 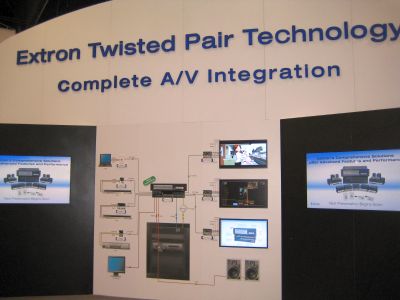 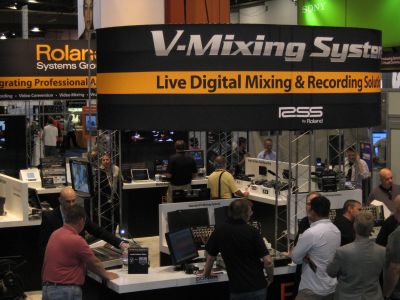 Went to my classes on web streaming, HDMI technology and projection. Met with some more vendors. Went back to room and took a nap. B gave me a holla, said he had a hook-up to check out George Wallace since he knew him. We rolled to the show. Just so happened that the entire line-up of sistahs from Miss Black USA were there for the show as well. Wow! The show was funny. George is a wild dude. We stuck around the talk to him after the show. He vented on my man B for calling him only when he wanted some free tickets or something. I laughed. George stopped talkin’ to B, called me a series of expletives, gave me an ice grill and then laughed. We shook hands, took a few pics and rolled. It was like 1am and we were starving. Ate at Outback. 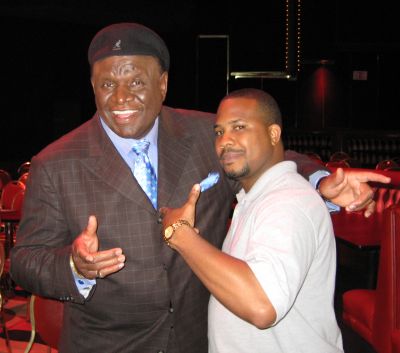 Thu: More expo stuff. More classes on IT/AV stuff, screen technology and aspect ratios. More meetings with vendors. Spent a good amount of time looking at new projection and video walls. One of the companies did the jumbotron for the Celtics. You know I had to take a pic of that. 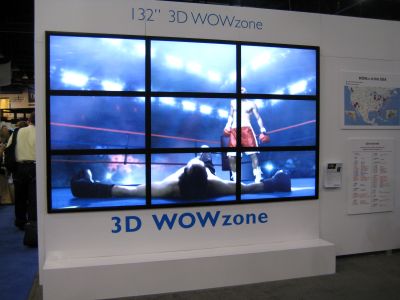 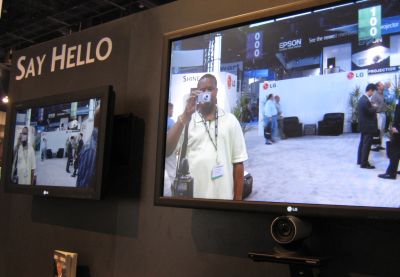 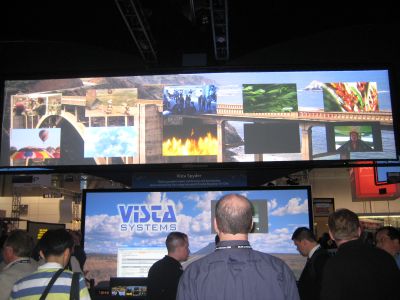 Another class on project management. Went back to room. Rolled to MGM to see Cirque du Soleil: KA with the free passes my vendor gave me. The show was incredible, plus they comped all drinks and food at the reception by the pool before the show. B rolled through after the show and we went over the after-party at Studio 54 . It was sponsored and free, so what the hell? I don’t know how long we were there, maybe about 4 hours. Interesting club. They were doing all kinda acrobatics up in there. Not a lotta brothas or sistahs though. Had a ‘few’ drinks. Okay, more than a few. Then messed up by leaving the club and eating at Nathan’s. Hotdogs, fries and ketchup don’t mix well with Long Islands and Cran-Vodka’s. 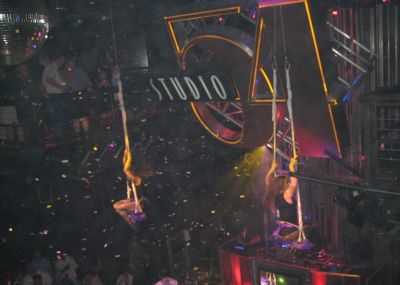 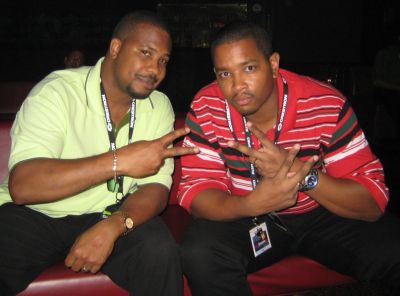 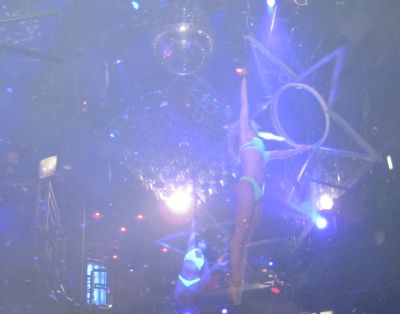 Fri: Woke up late and had a stomach ache. Missed the shuttle and the first 20 minutes of class. It was cool though cuz the instructor is based in VA and he comes by my job a lot to assist us with tech issues. He agreed to do a full day class for my techs sometime this summer for free. After that I rolled over to Mandalay Bay to the House of Blues.

There I met with the sound engineers and the designers of the facility. They gave me a tour of the entire facility and gave me some new technology tips on doing live sound… which is my first love. After talking with them, I discovered that they also did the entire sound design for the new Dallas Cowboys stadium in Arlington. You know that was something I was really interested in. They provided me the contact info for the multimedia operations contractor who will be handling the sound crew there for game operations. What’s funny is that I joked months ago with my wife about wanting to work at the new stadium. Could it be possible? We’ll see. Kevin Garnett said “Anythiiiiiiiiiiiiing is possibllllllllllllllllle”. You know I had to throw some Celtics up in here right?

I then took all the email and contact info given to me about the Cowboys stadium construction and put it in my Blackberry. Left from the HOB, said final goodbye’s with vendors and folks I knew in the industry and went to California Pizza to get my Jamaican Jerk Chicken Pizza. Yes lawd!!! Lounged around the strip most of the night picking up souvenirs for the wife, my nieces, family members, etc. Didn’t really sleep at all. Just walked around all night just enjoying my last night in the sauna. Took some pics of the sights as I strolled by the Palazzo and the Venetian. Now make no mistake about it. I talked to my wife every single day I was there. The time change kinda had me off at times and I’d awaken her out of a deep sleep, but we did communicate each day. 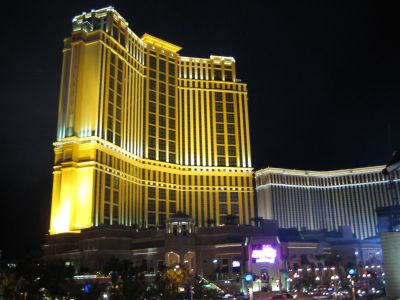 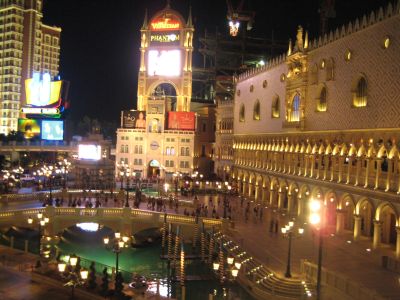 Sat: Threw on my Celtics #30 Bias jersey, grabbed my stuff and checked out. Got a cab to the airport. While in the ridiculously long line at United to check my bags, I heard a chant of “Beat LA” behind me. It was an older white gentleman who had on a Red Sox hat and said he was a Celtics fan. He then said something that caught me off guard. He loudly and angrily stated “I don’t see how you could wear that jersey. Bias cost us many years and the Celtics were terrible after what he did”. I calmly looked back at him and said “Let me explain something to you. I’m from Maryland. As a kid, I used to spend my last dollar to see Lenny play at Cole Field House when he was playing with the Terps. Furthermore, I attended Northwestern HS with his brother Jay who also died. I had this jersey custom made myself as a tribute to both of those guys. What you say doesn’t phase me or anyone who has those guys in their heart as I do”. I then turned back around and didn’t say another word to the dude. 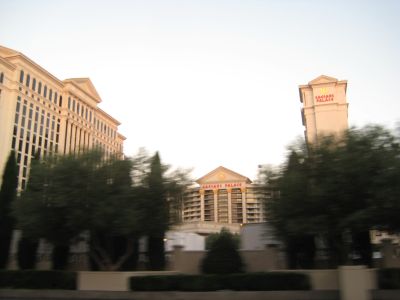 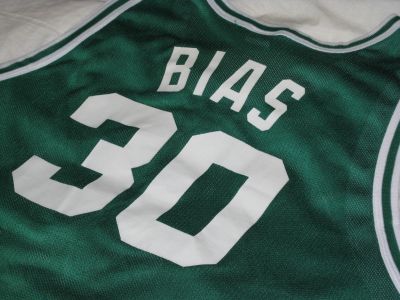 I finally was able to check my bag, make it to security and made my way to Hudson News. While in line to pay for my magazine, I heard a voice say “Classic jersey man”. I looked behind me to see a Black dude who was accompanied by former NBA baller Charles Oakley. Again he said “You gotta classic one right there man”. I gave them dap and went onto catch my flight. Now you know had my camera not been deeply buried in my carry-on bag, I’d a whipped it out real quick and took a pic. I wasn’t exactly prepared to see anyone of note at the gate though. Lemme say this. Oak is a big dude. He’s got a lotta gray, but still looks like he could hit the court tomorrow and rough up a few cats. Aint that somethin’ though. Two separate stories related to one jersey. I’m not even gonna try and make it a Black vs white thing. I had plenty of white guys dap me up or ask me where I got the jersey from. But it was still kind of weird that day to experience two different outspoken views within minutes of each other. 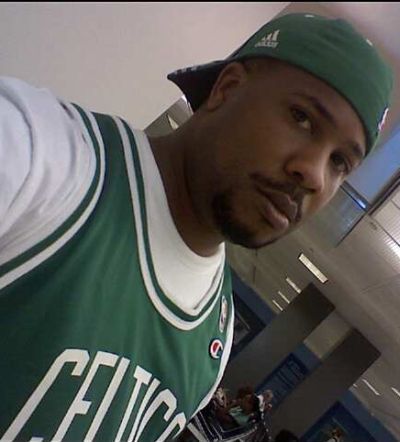 Caught the flight and made it home safely. But one more thing… United’s TED sucks. That’s what I flew to and from Vegas. I should’ve just stayed with Southwest. They’ve never let me down. Never.

That’s about it on the recap. I reserve the right to add pics when I feel like it aiiiiight. For now I need to get to these questions that fellow bloggers have been asking. That might take a while. Do y’all think I’m the Black Dr. Phil or somethin’. Gracious!!! A lot of relationship/marriage type questions. But I will answer them all.

4 thoughts on “Back In Stride Again”