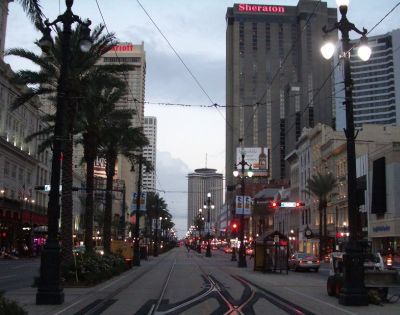 I’m sitting in the back of this Town Car reminiscing, as the driver is taking me home from the airport after my week long adventures in New Orleans. I can’t even front, ya boy had a blast. Now of course I was there on business, but I was there for an entire week. I mean, I knew the new gig had some perks off the break. But they got a brotha travelin’ and handlin’ production stuff now… which is cool. First off, I’m kinda salty cuz the weather is DC sure aint what it was in the Big Easy. I was over 80 degrees when I left there and it’s all chilly in the Metropolitan area in comparison. I was getting accustomed to waking up at 5am for a 6am crew call and walking the 1.5 miles to the studio each morning. The weather was real nice that hour of the morning fa real. I hate to think hot humid it might get in August though. But the walk was quite enjoyable nonetheless. Hell, I even lost 4 lbs in that week. Seems quite impossible after all the food that I ate on Bourbon Street daily.

in the studio by day….

Let me just say that right now I’m craving cajun food and I need to find a good spot in DC to quench that thirst. No thanks Copeland’s, you can’t compare. Moving on. Being that the company is nice enough to take care of my meals as well as EVERYTHING else while on this business trip, I figured that I might as well go head and get my eat on. The did lace me up in a real nice hotel though. Props to the folks at the Chateau Sonesta for really making me feel at home. Anyway, here’s a lil’ bit of what I indulged in during my stay.

Thursday night – Crawfish & Chicken Quesadillas from the hotel
Friday night – (I was lunchin’) I had some nasty pizza on Bourbon St.
Saturday night – I got back on track with the Shrimp Creole at Desire’s
Sunday night– I had Crawfish Etouffee at Red Fish Grill
Monday night – Back at the Red Fish Grill, I had the Pasta Jambalaya
Tuesday night – Went over the the famous Mother’s Restaurant and had the Famous Ferdi Po’Boy. Now this is one slammin’ sammich made with ham, roast beef, gravy, creole mustard, shredded cabbage and sliced pickles. When I say that this joint was slammin’, I mean it was slammin’!!!! I added some red beans & rice on the side with a sweet potato pie for dessert. My Lawd!!!
Wednesday – No dinner, I just snacked on Zapp’s Potato Chips. The Cajun Crawtators are gooder den a mugg. That’s good eatin’ right there!!!

Trust me, I ate quite well the entire time I was there. All I listed was just what I had for dinner. I had some real nice grub sessions for breakfast and lunch too. I won’t even go into how many Hurricanes I consumed during my stay. Let’s just say one word… enough. Red Fish had what they called Cat 5 Hurricanes which were made with Bacardi 151 and those had a brotha jussssst riiiiight 🙂 I still don’t believe that I lost weight though. I feel like I was eating nonstop. Then again, those 12 hour days in the studio did have me on my feet and running a lot, so I suppose I was burning a ton of calories.

What can I say about Bourbon St? In one word… wild. It was like a party ere’ night out there. I had nights where I was more chill than others, but on a few I did kick it with some of my fellow co-workers and we ran the streets and bar/club hopped. After a while it felt like Groundhog day though. It became quite repetitive, but still fun. I witnessed a few crazy incidents though. I saw the whole throw the beads from the balcony stuff, in fact I was up on one of the balconies for about an hour one night. I was 2 feet away from a dude who was partying a lil’ too hard with the bare chested ladies and his girlfriend came through the crowd and straight laced him with a hard right hand to his left eye like a vintage Mike Tyson. That was a classic!!! I wish I had been recording cuz that was one for YouTube if there ever was one. The there was the cat who was soooooooo twisted that he fell asleep ON Bourbon St. He was out cold for like an hour. I took some pics of that one. It was funny as hell too.

on Bourbon St by night…. 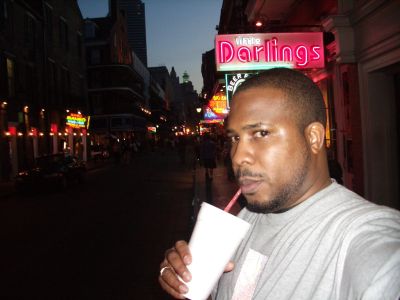 But for the most part, I was working. I got out in the evenings to see more of the city and to enjoy myself. It’s obvious that the city is still in recovery. Riding around in cabs and talking to the drivers became somewhat depressing at times cuz all they talked about was how bad things really were and how much still needs to be done. I found myself mad at George Bush over and over and subsequently reflecting on Spike Lee’s When The Levees Broke more than a few times. The 9th Ward is still in shambles. Our production crew went out there on Friday and the footage captured had tears in my eyes. I think my entire crew sat without emotion for that 2 hour period. It was sad to know that less than 15 minutes away from the lively environment of Bourbon Street, that so much damage had been done and still not repaired.

I walked around a lot by myself and just tried to get a vibe from the place on my own. No matter where you went, there was jazz music playing. I was digging that. I even enjoyed the youngins on the corner doin’ their thing. It reminded me of Fat Albert and the Cosby Kids playing in the band. Those kids on the corner of Canal & Bourbon were always jammin’ though. So much so that I had to give em a tip. Yeah, my cheap arse gave em some money… lol.

I hope to be able to get back to New Orleans though. I didn’t have as much time to really enjoy the city as I would’ve liked, but it was truly a memorable experience nonetheless.

Here are more of the pics taken from my trip. There aren’t a lot cuz I was busy working the majority of the time. But I did get some good shots in the time I spent out and about.

11 thoughts on “Ballin’ in Nawlins”