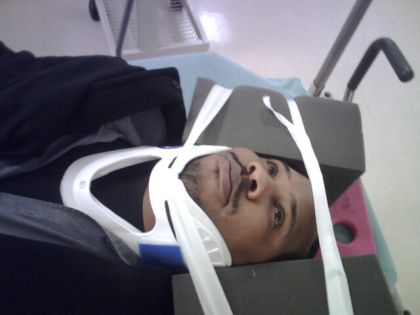 Not really sure where to begin, but I feel fortunate to be alive. The past 24 hours have been nothing short of amazing. Each day we wake up in our usual routine and take for granted how blessed we are to see another day. We see and hear about random tragic events that take place each day, but rarely ever put ourselves into the shoes of the victim or the emotions of those close to the person. One thing I can admit to doing quite often is getting into my car without putting the seatbelt on. I truly have an entirely new perspective on that now as I sit here with pain in my neck, chest & back and some minor tingling in my left arm. Basically, I’m recovering from a car accident I was involved in on Wednesday morning. Now, I’ve had my share of bang-up’s over the years, but this one was really different.

I’m cruising in the ride as I do each morning heading for the office. Had just finished listening to a voicemail message on my cell from my man E, who was clowning me about the Cowboys. I was jammin’ to the tunes on the Steve Harvey morning show on 96.3 and was waiting for the song to go off before callin’ my man back. I had my customary breakfast bag full of goodies on the passenger seat and was just finishing off a cinnamon roll. The car front of me was making a left turn and thus I applied the break as one would to come to a complete stop. Next thing I heard was BOOM! Before I had a second to turn to see where the noise was coming from I got ROCKED. I don’t even know how to explain it, but the impact was tremendous. In that split second, I felt like a rag doll as I body lunged forward heading toward the steering wheel. The seatbelt caught me, snapped my body back, lunged forward again and snapped back once more. I don’t know how many times this lunge and snap back process occurred, but it felt like it was a hundred times. Eventually my body came to rest in the driver’s seat where I had been initially.

I sat there. I sat in that spot in my car unable to move as I’m used to. I began to feel numbness in my left arm and pain in my chest. As I attempted to reach for my cell phone I could feel a sharp pain in my lower back. I glanced at the floor on the passenger side, my briefcase had flipped over and every item that was in my breakfast bag was scattered all over the place. With cell phone in hand and Bluetooth headset still on my ear, I dialed 911. I did my best to explain to them what had just occurred and where I was located. The pain continued to intensify and my neck began to tighten. The feelings in my chest and back were like being squeezed like a sponge. After calling the police, I called my job, my wife and my mom. My mom and sister worked less than a mile away and mom said that she was on her way. I couldn’t move much, but luckily with the phone in reach and the headset, I was able to facilitate calls. Had I needed to actually place the phone to my ear, I wouldn’t have been able to do it.

The driver of one of the cars came over to me, but I couldn’t turn my head to acknowledge him. He asked me if I was okay and I gave him a thumbs down. I began to hear the sound of the sirens as they approached. As fire & rescue arrived, they rushed over to me. They asked me whether I was able to get out of the car and I replied “No”. They then began the process of trying to get me out of the vehicle and onto this flat board. Around the same time as I sat patiently in pain, I saw my mom running down the street towards the accident scene. It kind of scared me. I mean, I hadn’t called her to try and make her nervous or anything. I just wanted to inform her of what had happened. But I could see the determination in her face and she ran. I wanted to yell out “Ma… I’m okay…Ma… I’m okay”, but I couldn’t. She finally got there and I heard her say “I’m his mother” and the paramedic on the scene urged her to calm down for fear that she’d be the next one going with them in the ambulance. 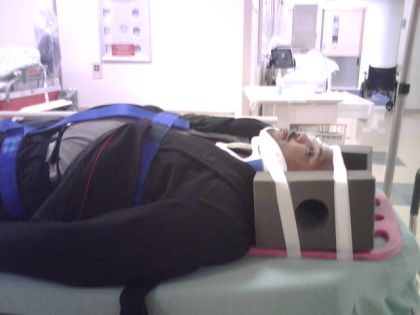 After what seemed like an eternity, they were finally able to get me out of the car and onto the stretcher. They stabilized me as they were cautious with regards to injuries to my neck and back. I was then lifted into the ambulance. Let me tell you, that 8 mile ride might’ve been the longest and most painful ride I’ve ever taken. Thankfully my sister arrived right before the ambulance left the scene and rode with me. Having her there kept me from being too nervous and even made me laugh a lil’ bit.

Get to the hospital and go through the usual. I’m laying on my back starting at ceiling tiles and lights and these folks are asking me everything under the sun. I could’ve swore that I answered the same questions with at least 3 different people. It felt weird laying there all stiff. I could wiggle my toes, but if I tried to lift my feet in any way, my lower back would get a stabbing pain in it. The police came to take a report while I was laying there. At that time the officer informed me that all parties except me had been cited in the accident and that I will need to come to court in the future on this case. They say that there were 4 cars involved in the collision. But I couldn’t tell you whether it were 4 or 40. I didn’t see much of anything at all. I just felt everything and took the brunt of the impact of those vehicles collectively who had to have been speeding.

My sister stayed with me as I just lay there waiting for the nurses and doctors to come. The pain began to intensify. I grabbed onto the side rail of the stretcher and tried to brace myself against the pain. I had my eyes closed during the process because the inability to move began to scare me. I felt this warm hand embrace mine and I heard a voice say “Calm down… it’s gonna be okay”. It was my wife. From the angle I was laying, I couldn’t see her initially but it didn’t matter. When she maneuvered herself to where my visual path was, I could see the tears in her eyes. I instantly saw the love and concern of the woman I married. Both her and my sister stood there with me until the Radiology technicians arrived.

I was taken for x-rays and it took close to an hour to complete. They took images from my neck, my spine, my pelvis, my shoulders, my jaw, my chest and whatever else. It was hard cuz I couldn’t really move with being strapped down and all. About 2 hours later, they informed me that I suffered no broken bones, only some minor bruises, strains and pain in chest from the impact. Having that seatbelt on saved me. Had it not been on, I may have been more seriously injured and even possibly been thrown into the windshield. I can admit to not always buckling up cuz I’m quick to jump in the car and forget sometimes. But you don’t have to worry about me not ever doing it again. Laying there in pain was one thing. Almost harder with my wife, mom, sister, mom’s husband and my mother-in-law right there with me in the ER. I could see the calm anxiety in their faces.

My guardian angel was with me today. God took care of me and now I’m back home. Even through the countless medications prescribed, I’m still very sore and in pain… but I’m at peace. I’ll probably be on injured reserve for a while and be away from the office for a week or so… who knows? I’ll have to take each day one at a time and not rush the natural healing. Guess I’ll catch up on my Netflix movies and net surfing. Another day full of judge shows on TV and I might not make it.

Buckle up folks… you just never know. I shudder to think about the condition I’d be in right now if I hadn’t had my seatbelt on. Tomorrow is not promised. With each day, we have to thank God for seeing us through regardless of the hardships that may come along the way. I can’t help but to reflect on how bad this accident could’ve been. I mean, I still can’t really tell you anything. I was minding my own, driving safely and totally oblivious as to the events that led to my condition today. I’m so happy to have folks in my life who love me. If nothing else, I witnessed that again today with my family by my side at the hospital. That definitely warms my heart.

Tell the folks who you care about that you love them… okay? Just do that for me…

Oh yeah… I’d like to thank my sister. She’s the one responsible for the camera phone pics. The police have all the information about the accident and who did what to whom on the road, which led me to be injured. But I guess it won’t hurt to have these for State Farm and my attorney. The pics are a reminder that God indeed was with me and that I was covered.

18 thoughts on “Bruised, but not broken”