Do you fish it out or just chalk it up as a loss and get another one? Well, I’m a Teenage Mutant Ninja Turtle at heart and always up for excitement and challenges. So you know what I did. 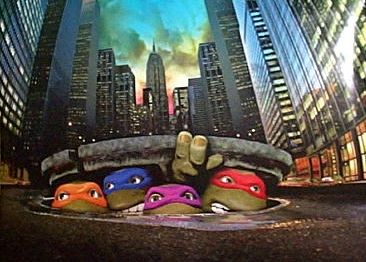 It was about 1am when I arrived home from hanging out with some of my boys. I know, you’re probably like… “You arrived home at 1am… that’s when I leave the house”. No need for old man jokes aiiiight. Anyway, I had just gotten out of my car and in trying to secure my Blackberry in my hands, it slipped. It didn’t just hit the pavement however. It crashed down and fell directly into the storm drain. Yeah, that storm drain. I stood there for a minute replaying what had just occurred. I saw the slow motion version of me fumbling the phone like a bad RB exchange from the QB. I laughed and walked toward the house. I was going to leave it there and just get another one from the office on Tuesday after the Labor Day holiday off. Yet, I said to myself “You can get it. It won’t be that bad”.

Thus, I went inside and grabbed my tools. After gathering 2 flashlights and 2 flat head screwdrivers I went to my destination… the manhole cover. Within a few seconds I had pried the cover off and that cover was on the ground. I grabbed the large flashlight and looked into the drain. Ewwww!!! Cobwebs and all kinda nastiness down there. I looked around to make sure that I didn’t see any bats as well. However I did see most of my phone. The battery, the backing and the SIM card were all in view. I took a deep breath. Where was the phone itself? There was only one place it could’ve been. I climbed down into the drain and sure enough, the phone was in the drain pipe. After I grabbed 3 out of the 4 pieces of the phone, I climbed back out and went into the house. There I grabbed a thin stick that was on the side of the fridge. I was gonna need to use that stick to pull the phone up towards me.

Went back down into the storm drain. Stretched my body out like I was heading to the finish line of a 100m race at the Olympics and used the stick to get the phone within reach of my hands. It took probably about 45 seconds, but it seemed like an hour. I aint gonna front, I thought some kind of creature was gonna pop out and scare me half to death, bite me or something. I survived though, but I was dirty as a mug. Came back in and my wife was awake in the bedroom watching TV. I told her what had happened. She asked me whether I had dropped my LG Dare (personal cell) or the Blackberry (work cell) in the drain. I told her it was the Blackberry and she just laughed. I had to endure the Crackberry lecture and reasons as to why I needed my work Blackberry on the weekends. It’s convenience folks… convenience. I can admit that I use it a lot. Hell, I’m not paying for it. Might as well use it. But I suppose I can cut back on the usage somewhat.

Once I finished talking and she stopped laughing, I took off the filthy clothes and stepped into the shower where I got fresh and clean once again. I think I might’ve used half the bar of soap, 5 full oz of body wash and 2 handfulls of shampoo just to rid myself of the ills of that dirty storm drain.

Moral of the story. I don’t know that there is one. I know for sure that I’ll make sure to secure all keys and phones the minute I step from my car next time though. I don’t ever want to have to do that again.

8 thoughts on “Cell phone falls down the storm drain”