It’s 7:27 on Thursday evening and I’m in the bathroom staring at the mirror. I moved closer and closer to the mirror to thoroughly inspect my lips. Dayuuummmmmmm!!!! I got a big ole’ blister in the middle of my bottom lip. I could do nothing more but shake my head like a lil’ kid who knew he had gotten caught with his hand in the cookie jar. I tell ya, the things that we do in life that we know damn well we’re not supposed to do. I’m allergic to shellfish and I’ve been aware of this fact since I was grade school. I found that out after a CT Scan for migraines that I suffer from revealed an iodine allergy. The iodine dye that they used caused me to have a serious reaction. Anyway, what that means is that I cannot have any crabs, lobster, shrimp, snails, clams or oysters. On previous occasions throughout my life when I was unsuccessful in attempts to sneak a few pieces of shrimp or some crab legs, I’ve had terrible reactions. I’ve broken out in hives, began wheezing, had difficulty breathing and developed massive swelling on my face. On one occasion back in ’96 (after eating some seafood salad at a 4th of July BBQ) I even had to be rushed to the Emergency Room. One other side effect that I’ve encountered before is the swelling of my lips. They at times blister and turn red. I’m talkin’ bout a set of big swole lips that would make Biz Markie’s joints look miniature. You’d a thought that Mike Tyson hit me with a combo across the face. Bruh mayne be walkin’ around talkin’ like Mushmouth and what not.

Okay, now back to the reason why I was standing in front of the mirror. I worked a lil’ OT at the job today. They were having an awards dinner for the journalists and needed a technician to run audio and lights for the event. So after doing a quick sound check in our corporate dining room, I went into the control room to chill for a while. 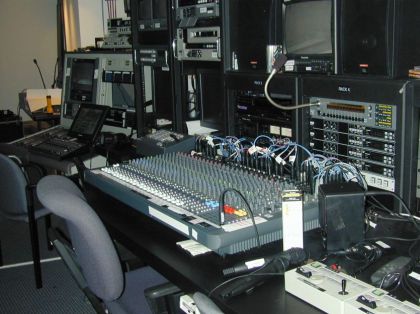 Now when the company has these evening dinner events, they always make sure that the A/V technician (<---that's me) gets well taken care of. The food at most of these functions is off the hook. Anyway, around 7:15 I ventured from the control room to get a gauge on the crowd and to make sure that I wasn't needed for any technical related issues. The lead banquet server walked by me, tapped my shoulder and pointed towards the bar. Right there on the side of the table was a platter of Hor'Deurves which included a ton of jumbo coconut shrimp. At that point it was up to me to get em or let someone else swipe em. Without a second thought I ran over and scooped up a handful, then went back to my chill spot in the control room. I sat and watched ESPN on one of the many monitors in the room while I devoured the shrimp one by one. As I took a bite into the last piece of coconut shrimp that I had, I felt an instant ache in my bottom lip. It felt as if someone had stuck a sewing needle into it. I immediately knew what I had done. Well, I did know the risk involved when I took the shrimp to begin with. I quickly downed some cranberry juice that I had in a glass and took the ice into my mouth to try and cool the achy feeling. That didn't do much to relieve the pain that I felt at the time. I walked calmly to the bathroom to survey the damage. The evidence in front of me was exactly what I expected. I quickly ran back to my desk and found my stash of Benadryl. I popped a single pill in an attempt to combat the onslaught of imminent side effects. As I walked back to the control room, I kept thinking to myself about whether it was really worth it. I was going through all of this all cuz I just couldn’t resist eating that coconut shrimp. 2 minutes is prolly all it took for me to down those jumbo shrimp and for the next few hours I was gonna suffer. Was it really worth it??? Yeah… it was!!!!!!

One thought on “Coconut Shrimp”