Yo… I’m over here dying. I’m glad the little girl is okay, but the similarities in this story cannot be ignored…. they just can’t be. A-Rod and the Yankees better be careful next time they go to Boston. Oh yeah, for future blog and message board purposes, this picture screams OWNED!!!! lol 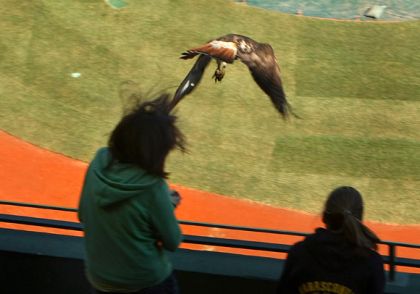 An omen? Hawk attacks girl with a familiar-sounding name at Fenway

A certain New York Yankee slugger should beware: A student taking a tour of Fenway Park today was attacked by a red-tailed hawk that swooped off its nest, drawing blood from the girl’s scalp.

The eighth-grader was taken by ambulance to a local hospital and treated for the small scratch on her scalp.

The 3 1/2-pound hawk has been building nests at Fenway since 2002, but has always been chased out before opening day so she and her mate could find a new home, said Tom French, assistant director of MassWildlife.

This spring the raptor used a brown-knit cap and twigs from trees on Yawkey Way to build a nest on a green overhang near the press booth above home plate. She laid a brown-speckled egg last week, but it rolled off the nest, wasn’t properly incubated, and was no longer viable, French said.

Wildlife officials removed the egg and the nest after the hawk’s attack, which was captured by veteran Globe photographer John Tlumacki.

Could it be an omen for Yankee Alex Rodriguez, who once got in a glove-in-the-face scuffle with Red Sox catcher Jason Varitek at Fenway in 2004?

“I deal in science, not mythology,” French said, refusing to make any baseball predictions based on the feisty hawk. “Although you could say she has done a good job protecting her home plate.”