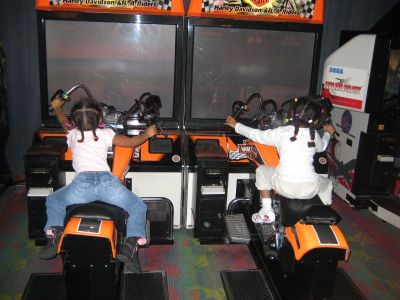 My man Brother Bruce called and reminded me on Friday night that the church was sponsoring the kids out to Dave & Buster’s for a few hours. So I decided to scoop up my two youngest nieces for a while to get them out of the house. My oldest niece was gone for the weekend and thus was already out having fun somewhere. Anyway, I drove over to my sisters and got em. The whole ride there all they wanted to talk about was Disney World. We got to the spot and they wanted to be all shy. All these kids running around and they’re clinging onto me. I got no less than 100 inquiries from them about when were they gonna get a chance to play in a 15 minute time frame. The organizers gathered the entire group of children and parents in a small room reserved for the church and made a few announcements. They had a catered lunch prepared for everyone and that was the first order of biz before the game cards were given out.

I want spaghetti was call heard from my nieces mouths as they sat at the table. Well, there was no spaghetti, but they did have nachos, small hamburgers, mini pizzas and chicken fingers. Trust me, that was sufficient for them. After about 30 minutes of eating lunch, we were given the game cards. They gave me the “Aiiiight, it’s time to play” look and we were off. We got over to the game side and I began to try and find something for them to play. My youngest niece quickly grabbed a gun from one of the games and shouted “Pow Pow”. Now, I do not advocate for children to play violent games and thus I did not allow them to play games with shooting of any kind. 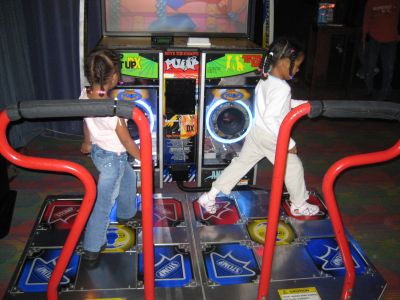 Well, if you’ve ever been to D&B, you’d know that probably more than half of the games there are quite violent. So we were limited to the cars, motorcycles, jet skis, water race, and a lot of random video games. Their legs were too short to reach the pedals on the majority of the rides, so guess who became the designated accelerator? Of course, I did and my body was stretched all over trying to reach those pedals for both of them at the same time. I hope no one took pics of me all spread out like I was. Talk about pressure from young kids to help em out. I think they might’ve had their most fun on the Dance Dance Revolution thing. It’s not like they actually knew what they were doing, but it didn’t much matter. All they knew was that a crowd of folks were watching them and smiling.

I saw the skee ball and remembered how much they played at Chuck E. Cheese, but the balls were far too heavy for them to roll up the ramp. So what did they do? They threw them overhand like baseballs…. lol. I think a few folks got scared from the noise of the ball hitting the ramp and quickly disappeared. After about three hours of running around after them we ended up at the photo booth. They absolutely love that. So, I let them play in there and pose for about 15 minutes. 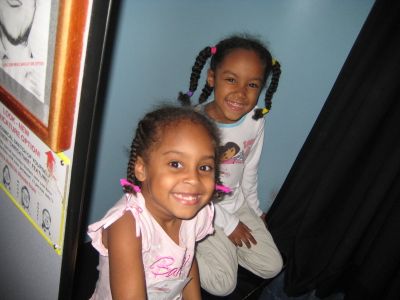 Not too much more occurred after that. We left D&B and went to the park. Talk about a brotha being tired. Those lil’ girls had me ready to take a nap. Speaking of nap, my wife and I took all 3 girls to Disney on Ice in mid February and I never did an entry about it. Nothing much to speak of, but the girls really had a good time. However, when we got them in the car they crashed and were knocked out cold in sleep. I took a pic of the moment and so I’ll just add that pic and a few others from that day in this entry. 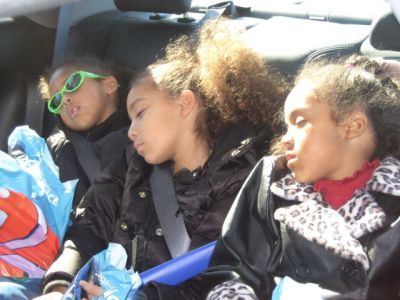 If you haven’t been a reader of my blog for a while, you might not be familiar with my entries regarding my nieces. I love being an uncle and I truly enjoy spending quality time with them and seeing their smiling faces. In return, when we have kids they’ll be around to babysit. 🙂

One thing is for certain… Dave & Buster’s aint Chuck E. Cheese!!! I’ll have plenty of time to make up for subjecting them to more adult like games though as their birthdays come up in the months of April, May & June.

Dave & Busters and The Park