Now, saying this is like asking if white people eat a 2 piece w/biscuit & red, beans and rice from Popeye’s I suppose… but anyway. This past Friday I attended a scheduled business lunch with some Directors and VP’s from my organization. Now, the location that had been selected prior was a steak restaurant in downtown DC. About 5 minutes before we rolled out I was informed that there had been a change in venue. The primary facilitator of the meeting wanted to go to a sushi restaurant instead. This was a spot in downtown DC that people and critics supposedly ranted and raved about. Now I’ve had some interesting foods in my life and had only tried sushi once and wasn’t too fond of it. But since I was on the list of attendees for the meeting, I went along and hoped for the best. We got there, sat down and looked over the menu’s that were there. I swear, I didn’t know what the hell I was reading. I looked up to see what everybody else was doing and they were all calm and what not ready to place their order. I looked at the menu again and saw some Teriyaki Chicken and decided to order that. However, the sushi menu was passed to me and like an idiot I tried to play it cool. I saw something that said Crunchy Shrimp Roll and decided to order some sushi like the rest of my crew on top of my previous selection.

So I’m sitting there talking with my colleagues and at the same time observing others in the restaurant and what they’re eating. There was no silverware on the tables, just chopsticks. Now, I’ve used chopsticks before, but I’ve always had the option of silverware if I wanted it. This felt kinda weird. The waitress brought some salad and a soup and I ate that with no problem. One of the guys at the table joked (or at least I think he was joking) that the salad dressing was made from fish eggs. Oh well… I ate it anyway. I sat back and drank my green tea and responded to a few emails on the Blackberry. Shortly thereafter, the food came. 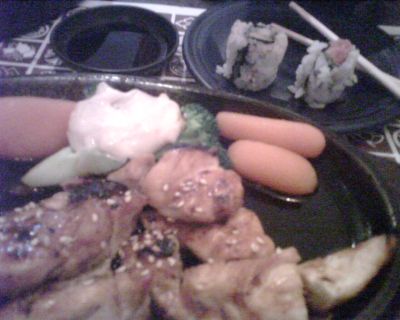 The chicken was real tasty and I tore that up. The sushi that I ordered was on the other side of the tray and so I figured I’d try my hand at some sushi that was closest to me. I mixed up some soy sauce with the Wasabi into a nice lil’ concoction, grabbed the sushi from the tray and dipped it in. My co-worker advised me that I had just picked up some sushi with eel in it. Well, you know the kid had to maintain his composure and act like he had been there before. I put it up to my lips, took a bite and heard a loud crunch follow by what seemed like a huge burst of goo in my mouth. The regurgitation occurred within seconds. I looked around to see that no one was paying attention to me, quickly reached for my napkin and deposited the entire mass into it. Yuck!!!! I grabbed my tea and tried to drink the taste of the sushi out of my mouth.

Now, you’d think I’d give up after that right? Ohhhh noooooooo… I had to keep on with the facade to impress. I decided to eat two more selections of sushi, some tuna and the crunchy shrimp that I had ordered. Now, keep in mind that I’m allergic to shellfish. Yes, I was playing Russian Roulette with my health tryna be like the other executives in there. Luckily I didn’t have any reactions or anything. While I was on the Blackberry ,I snapped a few pics of my lunchtime meal. When I got back to the office, I had to laugh at myself. No one else in the place knew what had taken place. As far as they knew, I enjoyed myself. Lord please don’t have these folks asking me to go there with them again, I prayed silently. I just don’t get how people eat sushi. I mean, it looks so beautiful and tastes so nasty. I know a few of my Black friends who swear by sushi bars and God bless them. This is one brotha who you aint gotta worry about eating sushi again.

That leads me to ask… do you like sushi? Was it something that you liked from the jump or something that you grew to enjoy? I’m just curious about that. I don’t see myself eating it again anytime soon, but I suppose you can never say never.