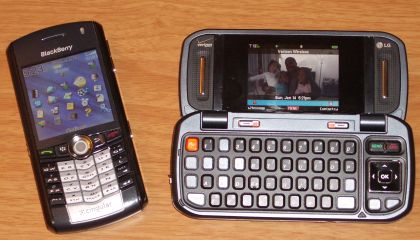 Now as techie as I am, most folks would be surprised to know that I’m just now getting with the program so-to-speak. I’ve been fairly content with my ‘regular’ cell phones over the years. I never really felt the need to be as connected as I am now. Then again, it’s still not that essential to me. With all that being said I have 2 new toys at my disposal. I’ve got a LG enV VX9900 from Verizon and a Blackberry Pearl 8100 from Cingular. Now folks who are aware that I was a Regional Manager with Cellular One (now Cingular) back in the mid 90’s are probably scratching their heads now, cuz they know I’ve had nothing positive to say about that company, their network and customer service at all. I’ll explain in a sec.

The LG enV was a gift for Christmas from my sweetheart. It kinda reminds me of a T-Mobile Sidekick. I had an older LG cell phone that had been through the ringer and I was due for a new one. It’s only about a year old, but I’m hard on my stuff so it’s kinda jacked up. Anyway, I saw the commercials for the enV and decided to check it out at the Verizon store. After playing with it in the store, I fell in love with it. It has that QWERTY keyboard that makes it so much easier to send text messages and the 2.0 megapixel camera is awesome!!! It’s Bluetooth capable, has integrated GPS navigation, voice recognition and can stream music and video over high-speed EV-DO connection. However, since my ‘New Every 2′ option wasn’t available until May I would’ve ended up paying a lil’ bit more for the phone. So my baby took a page from Beyonce’s book and said “partner let me upgrade you”. Aiiight, aiiiight, that was corny. 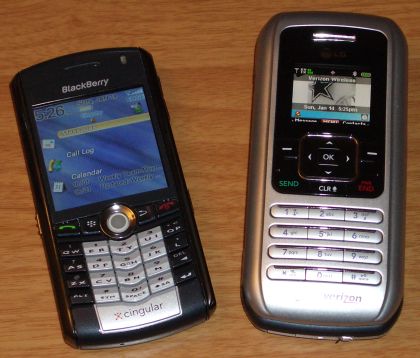 Moving right along. The Blackberry Pearl was provided by the job and is primarily for work purposes. It keeps me in touch with the entire staff and contractors I must remain in contact with 24/7 via email. That sounds like a lot of fun doesn’t it? It’s even got Push-To-Talk so I’m really accessible. Well, in my new capacity there are times when folks need to reach me and well… now I’m reachable. It still feels sort of odd to be in a position where folks hinge on my word as the final say or before they sign off on something. I’ve been in ‘The Technician’ for so long, that part of me still wants to be out there in the mix. Instead I now spend most of my work days in meetings, reviewing proposals, looking over schematics and floor plans, and staying on top of the technicians and contractors working in the building. But hey, with growth comes responsibility and I’m still very thankful for the opportunities afforded me. Even though I spend a good amount of my time using the Blackberry to respond to work emails, I do use it to surf the net and as my own personal Mapquest (courtesy of Blackberry Maps). It is very compact and can pretty much do everything you can imagine and much more. Hell, I’ve only had it for 2 weeks and each time I grab it, I find something else to use it for. The fact that the all-in-one of phone, email, text messaging (SMS and MMS), browser, instant messaging and organizer applications in a single smartphone is the biggest reason to have the Pearl. The camera does 1.3-megapixels and the media player plays audio and video in a variety of formats as well. I really dig the trackball navigation system though. It makes it easy to scroll through everything.

Anyway, enough on the tech stuff. A brotha has been mad busy. I don’t have as much ‘free’ time as I did before at the ‘other’ job. The days of me sitting around waiting for someone to call with a problem, running to fix it and then going back to my desk to chill are pretty much over. From the moment I now walk in my office until the time I leave, I’ve got something to do. Having the Blackberry also ensures that the work day doesn’t end when I leave. I’m not online doing stuff to pass the time anymore and therefore my blogging time has been cut back to the bare minimum. I suppose I’ll throw up a new entry once a week or so. I’ll just play it by ear and see how it goes.
Hope everybody out there is focused on having a positive and great 2007.