I’m sitting at my desk on Friday afternoon when I get a call from my man Big E. We rap about a few things and then he inquires as to what I was doing for the weekend. He informs me of a fishing trip that he’s hooking up for the fellas in Delaware for Sunday. Now, I’ve never gone fishing, but I’ve heard so many positive things from guys who’ve gone. Yes, I’m 34 years old and have never been fishing. Save the jokes aiiiight. Hell, even my fiancée told me stories of how she enjoyed fishing with her father. So I suppose you could say that for the first time in my life, I actually considered going. The way I always hear the fellas describe it, fishing sounds like going to the barbershop on the water. It seems like a place where the guys go to just relax, have fun and talk trash. Anyway, Saturday afternoon rolls around and Big E had told me to call him to let him know if I was going. Again, I was still contemplating. I don’t know what I was scared of, I just wasn’t sure. It wasn’t like I had anything else planned. I ran things by my sweetie, just to let her know what I was planning on doing and then I called my man back to give him the thumbs up. Oh boy, what had I just gottem myself into?

I awoke to the sound of the alarm at 5:45am. I jumped out of bed and started my preparation. I threw on some khaki shorts, my gray Grindstone Universal Fisherman t-shirt and my New Balance kicks. I heard a sleepy feminine voice say to me “You don’t want to put on your good clothes, you might get them dirty with blood and stuff”. Now a brotha who has never been fishing before isn’t thinking about what to wear. I don’t think I have any bummy clothes. Hell, I make sure that my t-shirt, shorts and sneaks match just to take the trash outside. I decided to keep on what I had on and not worry about it. I ran to the kitchen, put together two peanut butter and jelly sandwiches, a Ziploc bag full of green grapes, two bananas and some bottles of Gatorade. As I was getting ready to walk out the bedroom door, my baby began to give me random tidbits of advice. “Do this”, “Don’t do that”, “What kind of fish are you guys going for?” “What kind of bait is he using?”. If I hadn’t felt green enough, she definitely nailed the coffin shut on me and my lack of knowledge on what I was getting ready to embark upon.

I met up with Big E and my other partner GP around 7. I left my car in the parking lot at this hotel off Route 450, jumped in with the fellas and we began our journey down 50 towards Delaware. Now if I had any apprehension about what I was wearing, it all went away. My man GP was Nike’d down. It looked like he had just gone to Footlocker and copped an outfit just for the trip. Only thing was, he looked more suitable for the b-ball court than a boat. Come to find out that this was his first time fishing as well. Oh yeah, this was gonna be fun alright. About 1 1/2 hrs later we arrived at Big E’s folks house in Delaware. We all then piled into his cousin Drew’s truck where the boat was hitched onto the back and headed to the spot. To be honest I had no idea where we were. I don’t know the name of the place or what part of Delaware we ended up in. All I know is that there were tons of boats. Big E’s brother Dave met us up there and the adventure began.

We loaded up the boat with all the necessary things for the trip and all piled in. Big E drove the boat about 8 miles from shore and then turned the motor off. I stood up from where I was sitting only to quickly realize that I was way off balance due to the placement of the boat and the roughness of the waves. I’m saying to myself “Folks actually stand up on this unbalanced boat and try to catch fish like this?” This was indeed going to be real fun. It was about 11:30am at this point and I had no clue what the hell I was doing. Big E laced up a rod for me, threw some squid on the hook, gave me some instructions on how to use the rod and turned me loose. I sat there at the nose of the boat for about 15 minutes and nothing happened. Now you know that every time the current hit hard, I thought I had something on the hook. Wrong! A few moments later I hear my man GP at the back of the boat hollering. I turned just in time to see his rod bending toward the water and him trying to reel that thing in. Yep, he had caught his first one. It was a King fish. Don’t ask me what a King fish is, that’s what the other fellas said it was. I grabbed my digital camera off my hip and took a few pics of his with his first catch. I then sat and wondered when or if I would catch one.

Big E started the boat and drove to another location. Again, we all took up positions around the boat and threw our lines in. I was sitting there chillin’ when all of a sudden I felt a tug on my rod. I jumped up and started to reel it in. Oooops, I was turning it the wrong way. Big E same me messing up and came over with the quickness. He was able to save me. After a handful of turns, the line came out of the water and low and behold there was a fish. My first catch. The guys didn’t seem to excited. “It’s a baby Croaker”, Dave said. “You gotta throw him back”. Awww maaaaan. I was cool with that, but I was gonna take a picture of my first catch ever, even if I had to throw him back. So I handed Big E my camera and he took the pic. It was exactly 12:19pm when I made the catch. However according to the ‘rules’ I threw the lil’ baby fish back in the water.

For the next several hours we sat there on the water. I got seasick and it was nothing nice. The queasiness was awful. I tried to drink Sprite, but that didn’t work. Big E finally gave me some Dramamine for motion sickness. It cured that, but then I got dizzy and a lil’ bit sleepy from that medicine. I sat down and watched the guys for about 45 minutes or so until I got myself together. I still couldn’t get myself to eat my sandwiches and snacks though. Shortly thereafter I got up with a full burst of energy. I caught 3 more fish, 2 Spots and a White Perch. The White Perch was too small and he had to be thrown back too. The other experienced guys weren’t exactly having career days. GP and I had caught more fish than they had. It was kind of funny. The two guys who didn’t know what they were doing were catching the most fish. The next thing you know I was feeling good. It was cool being out there with the guys. We were all out there talking trash about this, that and whatever. I felt stable enough to eat and devoured my sandwiches and my grapes. My baby called my cell periodically to check on me. It felt pretty good to tell her that I had caught a few. Lord knows I would’ve felt funny coming back home empty handed.

At around 5pm or so we finished and drove back to the dock. From there we loaded Drew’s truck and went back to Big E’s peoples house. In the cooler there were all of 8 total fish, more than half were caught by myself and GP. I didn’t want them though. I wasn’t gonna clean those bad boys. Big E bagged them and gave them to GP so he could take to his folks house. I hopped in the backseat of Big E’s car and nodded off to sleep. I was tired. I really was. My face was all salty and I truly was drained. When I got home around 8:30, I immediately jumped in the shower. This had been a full day. But cha know what? I had a good time out there. My first experience fishing (minus the motion sickness for an hour or so) was a good one. I can honestly say that I really enjoyed myself. I better not say that too loud though cuz Big E likes to fish like every week. This brotha loves to fish on the regular. An outing here or there is cool with me, but I’m not ready to become a full-time fisherman yet. 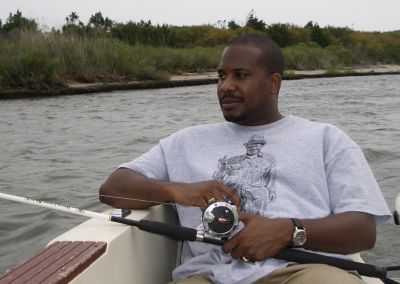