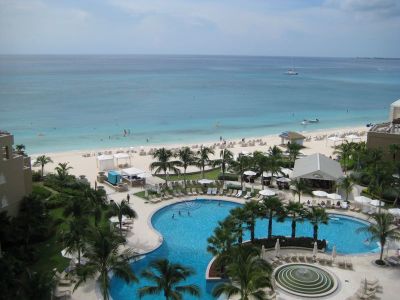 It took me some time to get this entry together, but it’s finally done. Between working crazy hours, narrowing down tons of wedding pics, baking sweets, playing fantasy sports and of course spending quality time with the wife, a brotha has been mad busy. I created two pic galleries because linking over 300 pics in one gallery is a lot, so I just split it up. Trust that I took out over 200 pics as I took over 500 the entire time we were there.

For starters, the entire honeymoon was my idea. My wife did a tremendous job in the wedding planning aspects and thus I set out to ensure that my end of the deal was nothing but top shelf. The hardest thing in selecting a location was avoiding hurricane season since we were getting married in September. For months I looked at brochures, read reviews on TripAdvisor and got vacation package quotes from various vendors. But I decided to do it by myself. Sometime in June I decided to go with Grand Cayman. Yeah, it was a risk with the weather and all but I braved it. I contacted the Ritz Carlton directly, got a nice deal with an oceanfront room and it was all set. The Ritz allows you to cancel up to 24 hrs prior to the arrival, so there was really no need for expensive trip insurance. Pretty much the same deal with American Airlines. In case of hurricane or extremely bad weather, they had provisions.

I kept the plans for the honeymoon a secret until the very end. I never once told her where we were going. The best clues were a list of 20 destinations written on a piece of paper, one of which was ours and the fact that I told her to pack like we were going back to Jamaica and to have her passport. That was it. The morning we left, I said nothing. We got to the airport and I still somehow kept her from finding out as I whispered our destination to the check-in clerk. The funniest thing was that our luggage tags has the destination on them, but she never looked at them when we walked our bags over to security. I even let her hold the envelope with the boarding passes, but she never looked at them. It wasn’t until we connected in Miami and she saw the destination at the departure gate we were leaving from that she then knew where we were going.

Now, I’m gonna try and be brief here. The island is incredible folks!!!! That’s the best that I can say and it does no justice to our experience. The water is so crystal clear, and the weather was a bit humid, but still gorgeous. From the moment we arrived to the moment we left, we were treated like royalty. My prior contact with the Ritz Carlton concierge paid off as they hooked up the room in every imaginable way from champagne and strawberries, to rose petals leading to the bed at night to soft jazz music playing upon our return from dinner. Now, I didn’t ask specifically for any of those things. All I stated to them was that I wanted our honeymoon to be the most memorable and amazing experience ever. They definitely provided that. The daily breakfast buffet was off the hook. From fried plantain to jerk yukon potatoes to omelets made to order to every meat and combo of waffles, pancakes and french toast you could imagine with every fruit topping you could create, it was something special. I still miss that fa real.

Tue Sept 25 – Arrived at the Ritz in GC. Was ushered to an oceanfront suite on the penthouse level where champagne and strawberries awaited us. Went swimming and snorkeling on 7 Mile Beach. Headed over to Foster’s grocery and got goods for our in-room fridge and microwave. Stopped to get some ice cream from Häagen-Dazs. Ordered a rack of room service food and went to sleep

Wed Sept 26 – Lazed around for a good part of the morning. Went swimming in the pool on the private garden side of the resort. There was not a single soul there, just us. Yeah, we fell in love with that right there. Enjoyed benefits of the amazing spa on site. From the jacuzzi to the sauna to the steam room, that spot was nice. When we left there we ate dinner by the ocean and sipped margaritas. Went back to the room, and was welcomed by rose petals everywhere. From the front door to the bed. They even crafted bathroom towels into swans by the pillows. It was sweet. Soaked that one in for a while, then made our own rum punch and chilled.

Thr Sept 27 – Rented a car from Avis and drove around the island. Had to get used to driving on the ‘wrong’ side of the car on the ‘wrong’ side of the street. While on our quest we went to Rum Point where we swam, snorkeled and then ate lunch. Drove around some more just sightseeing and eventually found the Turtle Farm. A lot of turtles, but good lawd did that place stink!!! Came back to the Ritz and ate a steak and lobster buffet dinner.

Fri Sept 28 – Took a boat trip via Captain Marvin’s to various snorkeling destinations and Stingray City. I garnered enough courage to go swim with the Stingrays. The wife refused to go in the water and just took a lot of pics while I was out there being adventurous. They said that as long as we didn’t pull the tail we wouldn’t end up like Steve Irwin. Yeah I might be crazy to have gone in there, but I did it anyway. It was fun. We got back from there and walked for what seemed like a mile to get a bite to eat at the Aqua Restaurant. It started raining a lil’ bit and we headed right back after we ate. Did stop at Burger King to grab some ‘syrup’ packets cuz the pure maple syrup at the morning buffet at the Ritz wasn’t to our liking. I know… we’re ghetto for that one.

Sat Sept 29 – More of a day where we just lounged around. Walked to a few liquor stores to get some rum cakes and drinks to bring back home for the fam. Went back to the private pool on the garden side we had gone to earlier. Ate dinner again on the beach as we watched the sunset and sipped on daiquiris.

Life is moving forward in so many positive ways. God continues to bless us and those around us.

For you married folks, where’d you go on your honeymoon? For you single folks, is there an island that you’ve been to that was just memorable to you? Just curious as to what other paradise spots are out there.

13 thoughts on “Honeymoon in Grand Cayman”