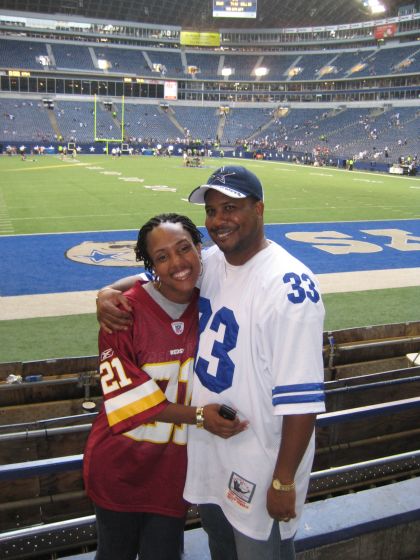 Don’t let my smile fool you. That was forced. Her smile was genuine as you can understand based on the outcome. I could easily accept defeat and be a good sport, but that’s so unlike me. I hate the Redskins. I’ve always hated them and that’s never going to change. She’s not gonna stop singing Hail To The Redskins or talkin’ trash regardless. If I hug her and say “Y’all got it”, she’ll scream it louder. Thus, I’ll just continue to tell her “You’re bad luck” as I have after every Skins-Boys games we’ve been to when Dallas has lost each and every one of them.

I’ve been besieged since the clock hit zeros. I’m sick to my stomach. Having to endure her and other Redskins fans celebrating in my face is the worst. The feeling I felt leaving Boston Garden after the Celtics beat the Lakers in Game 2 of the NBA Finals was an awesome feeling. This is the exact opposite. But you know what, I talk the talk so I’ll walk the walk. I owe a few lunches back at the office and I’ll pay up. Lord knows I’ve collected my share over the past few years. Win or lose, I still ride with my squad. I’ll state as I’ve always stated since I was old enough to throw a football…. DC stands for Dallas Cowboys!!!

Now, for the long flight home tonight and the Excedrin I’ll need the next few weeks until the Boys get a chance to get revenge on those joker Skins. All in all, we did have an enjoyable anniversary weekend here. We stayed at the Ritz Carlton in downtown Dallas, dined on some fine foods here at the hotel and even hit up a Whataburger while here. We attended a Skins-Boys afterparty for a few hours after the game and that was an event in itself. I’ll post the rest of the pics and vids when I’m back in town.

6 thoughts on “I Still Hate The Redskins”