Typical flying time from Washington, DC to Beijing, China is about 14 hours for the 6,940 miles. Well, I made the connection in about 3 minutes. How so you ask? Via IP, of course. Yesterday we had a 4 hour video conference with some folks in China at 9am Thursday their time. With them being 12 hrs ahead of us that meant 9pm Wednesday night for me. 9pm + 4hrs = 1am. Unfortunately I didn’t have the luxury of coming into work later as I sometimes do when working late nights. I was up in the office fairly early yesterday. Early for me is before 8am. Staring down the barrel of a 17+ hour day is not something that I tend to get excited about. I mean, I’ve done it many times in the past when working production projects or touring, but it’s been a while since I recall pulling anything over 12 hours knowingly.

It was all good though. It’s not often that I do international meetings like this. I did one with Melbourne, Australia and one with Buenos Aires, Argentina last year, but mostly 90% of the time it’s to points somewhere in the US. They cool thing was that the folks here laced me up with a hotel room for the night aka morning, so that when it was finally over I didn’t need to drive 40 minutes home. I dunno though, I appreciate the kind gesture but I would’ve easily took the 4 bills they paid for the room for myself and drove home and drove back in the morning. Hell, I might’ve even slept in my car in the parking garage fa real. However I wasn’t given that option.

Came in yesterday, handled business as usual and even got lucky cuz HR brought in Ben & Jerry’s to do a ice cream social for the staff in the afternoon. Ya know I’m a fiend for sweets, so I copped as cup of Mango Sorbet. I didn’t stop there though. I got another one with vanilla ice cream and threw some strawberries on it. But I stashed it in the freezer for later. Did some more work… kinda. Went over to my hotel room around 5:50pm just to check it, but had to be back in the office at 7:30pm for a production meeting. I lounged for like an hour watching ESPN Sportscenter and talked to the wife for a bit. Returned back to the building around 7:15pm and they had some catered food for us. Grubbed down on some cold cut sandwiches and pasta salad and got prepped for the main event.

We made the initial connection to Beijing around 7:45pm. They were beaming our feed into a hotel ballroom with a few hundred people. Yo… their set-up was off the chains. I could see their projection screens, their plasmas, their set-up on banquet tables with flat screens on each one, everything. Being a tech dude, I’m enamored with all that kinda stuff ya know. The initial logistics were kind of confusing at first. We only had one person on our end who truly understood what they were saying over there when speaking Chinese. However their participants who did speak English did a pretty good job of it and were well understood. The meeting kicked off and I assumed my position as the lead tech as always. Grabbed the headphones to check audio, made sure that the video feed was solid and engaged the recorders. That’s all I had to do. Then again, that’s all I ever do. That’s my job. I’mma production cat. You aint think I was gonna be sitting up in front of some cameras and monitors talking for 4 hrs did you? Naw… I’m the behind the scenes dude who is part of a team that makes it all happen. The execs, CEO’s, VP’s are the ones who do all the talking. They just call on me when they need something. I gather my crew and we make it happen. 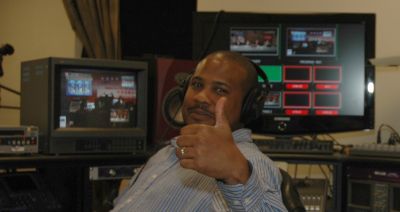 When all concluded I’d say it was a little after 1am. Did I go straight to the room and hit the sack. You’re crazy. One of the VP’s was so pleased with the video conference that we suggested that we all hit the bar for drinks on him. I, along with the 3 other guys in my crew took him up on that offer. I think we sat in the lobby of the hotel until around 2am or so. Not a long time, but good enough to unwind. Went back to the room, cut on ESPN and laid in the bed looking at NBA Playoff scenarios for about 30 minutes. I then took my butt to sleep. Woke-up around 7:15 with the TV still on. Switched to Fox5 and all these crazy folks were crying and overjoyed talkin’ about how seeing the Pope had changed their life and how today was the best day of their lives and all. I mean, you’d a thought they were little girls screaming and running after Michael Jackson in the ’84 Pepsi commercial. It was crazy. I just shook my head and got up. Did my morning routine and am now sitting in the office as usual. I’m a little tired. I even had coffee this morning… and I NEVER drink coffee.