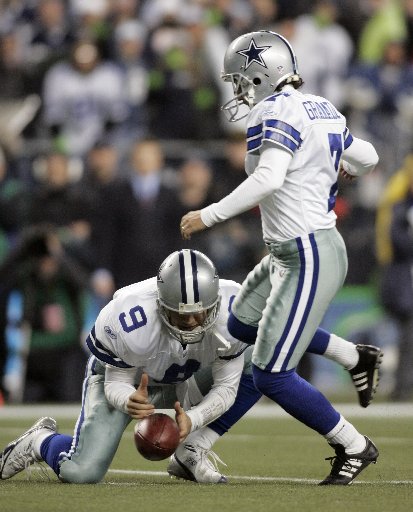 Yes, this is what I have to keep telling myself over and over again. Somehow the joyous celebration that I envisioned myself having last night was interrupted by a series of strange events. Thus I’m left with an empty, sick feeling in my stomach. I’m a true Cowboys fan as most readers of this blog should know by now and I’m a state of disbelief. The last time I felt this bad was the NFC Championship game back on January 10, 1982 when the Cowboys played the 49ers and Joe Montana made a miraculous TD throw to Dwight Clark that has known in football lore as “The Catch”.

Joe Montana took the snap and Cowboys DE’s Ed “Too Tall” Jones and Larry Bethea, along with LB D.D. Lewis chased a backpedalling Montana to the sideline where it looked as though he was going to get sacked or out of bounds. At the last moment, Montana threw a very high pass to the back of the endzone. 49ers receiver Dwight Clark made a leaping grab from the back of the end zone in front of Cowboys CB Everson Walls for the winning touchdown with 51 seconds left in the game. 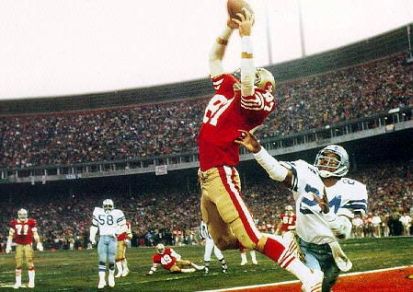 Now, things are lil’ bit different now. That event was almost 25 years ago and I was 9 years old at the time. That night I locked myself in my bedroom and refused to eat my dinner. I turned the lights out in my bedroom, cried and went to sleep. I’ve grown a lil’ bit (in age) since then but I’m still a very emotional cat. I pounded the floor with my fist, hollered a number of expletives, kicked over my computer chair and threw a few things went flying across the room. I walked outside, got in my car and sat for a while. I figured that I couldn’t break anything in there, plus I could holler and no one would hear me with the windows up. Now obviously this is no way for a grown man to act under the circumstances, but I was very upset at that time.

After about 20 minutes I came back into the house and my fiancée was sleeping. I suppose that when I came into the bedroom I was making more noise than necessary and it disturbed her. I was still in my mood from the turn of events of the game and it was apparent. We exchanged words back and forth, but one thing rings in my mind very clearly. She said “I don’t understand why you get like this over something you have no control over, it’s only a game“. Then she said something about me getting like this causing friction and affecting our relationship. Of course I wasn’t in the frame of mind to hear that last night, but it was true. Since I can remember, I’ve allowed my emotions to get the best of me after one of my favorite teams lost a crucial game. From Georgetown losing the NCAA Championship to Michael Jordan and North Carolina 63-62 on March 29, 1982 to the Celtics losing in 6 games to the Lakers in the NBA finals in 1987 to the year 2000 when the Mets lost the World Series to the Yankees in 5 games. I always remember myself feeling like somebody died or losing everything that I owned. However this time being out of control with my emotions took place in the presence of someone I love dearly.

Without warning my sweetheart bolted from the bedroom with a pillow and headed down the stairs to either the living room or the basement. Sadly, I let her go and didn’t give chase. I was too caught up in my own self to realize what I had done. I got into the bed and layed there for a few moments before falling asleep. I awoke at various points in the morning to find that I was still by myself. Yet, I did nothing. I still didn’t go check on her or leave my bedroom.

I awoke as I heard her coming through the door. I figured that she was preparing to go to church as usual, but I didn’t feel like going. After showering and getting herself together for about an hour she asked me if I was going. I replied “No“. I immediately saw the displeasure in her eyes. I suppose that I hadn’t learned enough from sleeping alone with the empty feeling of missing her, I was determined to make things worse. I can’t recall a time that we didn’t attend church together. She expressed to me in a more than a few words that she was disappointed in me and went on her way. I sat up in the bed and thought for a while. I began to feel really bad. I knew I was wrong with how I carried things last night, but I wasn’t man enough to apologize and move forward. Thus I sit here right now at the computer. After sitting here (painfully) looking at football stuff and checking email for about 20 minutes, I’ve decided to go to church. I feel stupid for letting something this simple put a divide between her and I.

Okay, I’m back. I feel pretty good after attending an excellent worship service. I walked into the sanctuary around 10:10am or so and sat right next to my sweetheart. She seemed a lil’ bit shocked, but not overly surprised. I got the “I’m happy you’re here, but you still have issues” look from her though. She may beg to differ, but that’s how I received it. Anyway, the reverend was just doing the morning welcome and greeting of visitors, so I wasn’t too bad off. As I sat there the praise team sang some very uplifting songs. Shortly thereafter we took part in Communion and the sermon began. One of the first things the reverend said was something to the effect of “If the horse you rode in 2006 is dead, then it’s time to dismount for 2007”. Basically he was saying that if you’ve dealt with issues in your life over the past year and things are still not going right, it’s time to find a new formula because what you’re doing hasn’t been working.

I took it in terms of things in my life as well, but also in relation to the Dallas Cowboys. I knew last week (2006) that my squad wasn’t playing well. I mean, they lost to the Detroit Lions in the last game of the regular season and have been gettin’ their butts whipped the last month of the season (minus the game I went to in ATL). I honestly knew it was a long shot for them to get to the Super Bowl, but yesterday (2007) I allowed their loss to effect me more than it should’ve. Thinking like that made me get a certain calm while sitting there in church. C’mon now, you didn’t think I could totally block it out did you????? Anyway, I listened intently to the sermon that he gave on the anointing of David and how he related the story to how we’ve got to get rid of the old things in our life and start new. How God has chosen our destiny and that sometimes we’re too stubborn to see the good things in our lives. The blessings are already out there, but we tend to block them by not doing what we’re supposed to do in life.

With all that being said I do realize that God has blessed me with a special woman in my life. Anyone who knows me and what I’ve been through in my life know that I can testify all day and night on this one. It’s been a major struggle just to find someone as special as she is and I love her with all my heart. She’s right with what she said. I do have to find a way to calm myself down when my teams lose important games. I’ve been this way for so long and it’s difficult to even contemplate not being overly emotional. However, I now realize that I’m affecting someone else. It wasn’t my desire to upset or hurt her, but I know that I did. For that, I apologize to her. It would be sad for me to destroy something as beautiful as what we have because my inability to control my emotions over a game. It’s only a game…