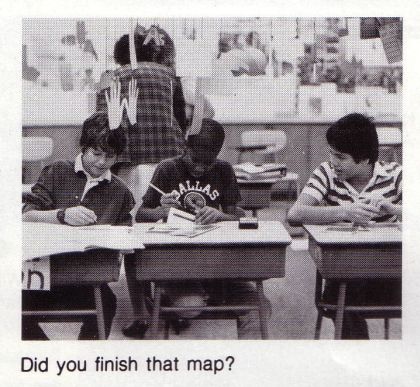 I reached in the crates for my yearbook from ’85 when I was in the 8th grade. If you look closely at the picture, you’ll notice that I’m rockin’ a Dallas Cowboys t-shirt while in class. That’s right, a DALLAS COWBOYS t-shirt. Now, there are those who will speculate that that shirt was worn for one reason or another and that is had nothing to do with me being a fan. That would not be a correct assessment however.

Let me explain the origin of me becoming a Cowboys fan. When playing football in kindergarten and scoring TD’s, I’d always do the Butch Johnson dance. 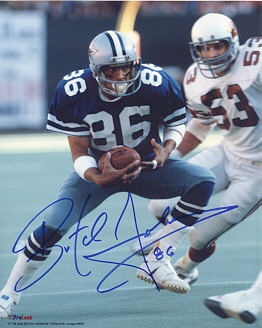 Only old school cats know about the gunslinger dance he used to do when he scored TD’s. According to a number of sources on the internet, Johnson’s touchdown celebration was know as the “California Quake”. He would simulate pulling guns out of holsters and proceed to shoot them and shake. Let me tell you, I used to do it and do it daily. That’s how often I got into the endzone from receptions or interceptions returned to TD’s. I was a baller back then. But also, I just always liked the Cowboys from when I was young. I hated burgundy & gold colors. Thus, I hated the Redskins. I never understood why anyone wanted to wear an ugly indian on their clothes. Then when we played Cowboys and Indians in school, who wanted a bow and arrow? Give me the gun!!!

I liked a rack of Cowboys players aside from Butch Johnson. Some of the guys I remember ‘being’ when I played with my friends were Tony Hill, Drew Pearson, Ron Springs, Everson Walls, Danny White Robert Newhouse, Michael Downs, Ed “Too Tall” Jones, Randy White, Dexter Clinkscales, Doug Cosbie, Rafael Septien, & Tony Dorsett.

So I’m True Blue baby!! If anyone ever questions me again, I’m sending them a link to this entry. And to Butch Johnson wherever you are out there… thanks man. You are the reason that I’m a Dallas Cowboys fan today.

Oh yeah, if you look back at the pic you’ll notice that I’m sitting kinda funny with one leg extended and the other leg bent and cuffed under me. I still do that today as well. LOL.