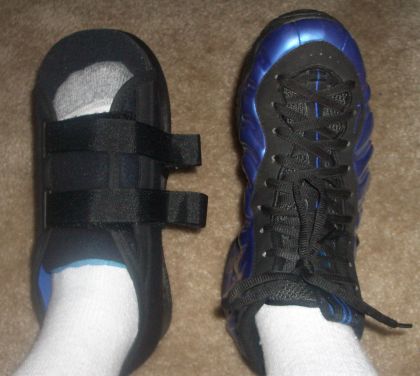 What’s wrong with this picture????

I’ve been gone for a sec, but as always the world continues to turn. I have a ton of things on my mind to write about, but I decided to take a break from doing so. I had a wonderful Thanksgiving spending time with my fiancee, both of our families and close friends. For those of you who gave my sweet potato recipe a shot, I hope you thoroughly enjoyed the pies. As for myself, I need to hit the gym real quick and shed these pounds I picked up eating all that turkey and a rack of sweets. However, my ability to exercise will be hindered by the fact that I must allow my left foot to heal. Yes, the clumsy kid has again found another way to injure himself. In my previous installment of Stupid Ways You’ve Injured Yourself back in May, I spoke of some of the strange ways that I’ve hurt myself. Well, this latest incident might take the cake.

It was Monday morning the 20th of November and the clock read 12:13am. I was headed to bed and realized that I had forgotten to take out the trash. The trash man usually comes by at 6am and I don’t usually get up until 7am, therefore I had to make sure the trash was at the corner. So I grabbed all the trashcans in the house and combined them all into one large bag. I quickly ran outside barefoot in my pajamas (aka basketball shorts and t-shirt) into the bitter cold and threw the bag to the corner. The toss was perfect as the bag landed right on top of the other bags already placed there by my neighbors. I turned around to run back up the concrete steps of my house and I lost my balance. In the process my left foot crashed into the step with full impact. I felt pain immediately and looked down at my foot. I had shattered the big toe nail on my left foot. My toe nail was barely intact with my skin and sticking straight up. That loud noise you heard is the screaming I was doing on the inside while remaining totally calm and quiet on the outside. Needless to say, it was bleeding profusely. I continued on into the house and walked into the bathroom outside the foyer. I ran ice cold water in the sink and stuck my foot into the water for a few minutes. While my foot soaked I quickly replayed the nonsense that had just occurred.

I grabbed enough paper towels to wrap my toe and hopped upstairs to my bedroom. I located some gauze underneath my bathroom counter, wrapped my foot and got dressed. I the drove myself to the ER at the Veteran’s Hospital. There were other hospitals close by, but the VA in DC was my best option for immediate treatment. I arrived there about 20 minutes later and was lucky to find that there was only one other patient in the ER. For the next 2 hours, the doctors took my vital signs and x-rayed my left foot. All went well with the x-rays which confirmed that nothing had been broken. However, there remained the issue of the toe nail on my left foot. After conversing with the medical personnel in the ER, I agreed to allow them to remove it. Hell, 80% of it was detached from the skin and that was really the only option at the time anyway. I sat there patiently as they gave me a basin of Betadine to soak my foot in. 30 minutes later the good doc walked in the room with forceps and some ‘other’ tools to initiate the removal.

Folks, I’ve experienced some pain… but none like this. I mean, this was like having a wisdom tooth removed with no Novocaine. Those jokers didn’t even give me a shot of pain medicine or nothing. I laid there on the table as the felt the doctor tug and cut, tug and cut, tug and cut. He reminded me not to look and I assured him that I had no intention of looking downward. I was too busy breathing hard, biting the strings on my hoodie and clenching my fists. After what seemed like an eternity, he finally got it off. Of course the curiosity seeker in me had to look at my toe. Goooood Lawd!!!!!!!!!! It was gone. I took a quick cameraphone pic of it, but I don’t want anyone to get sick… so I won’t post it. There was nothing left to my toe but skin, the nail was completely gone. The nursing assistant came in and bandaged it up and then gave me a shot of Morphine in my hind parts. The relief from the shot felt good, but why the hell did they wait til after the procedure to give me the shot???? I slept for a few hours and then was given a bag full of gauze, triple antibiotic ointment and some medical tape so I could changed the dressings daily at home. They also gave me a medpack of Percocet and some oral antibiotics. 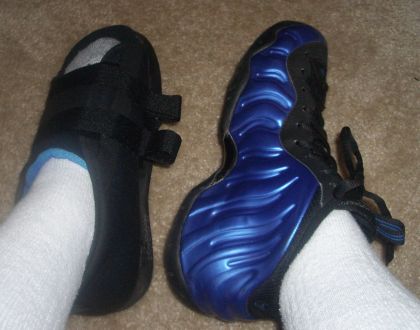 So to make a long story short, I’ve been walking (aka limping) around for the past week and a half in a moderate amount of pain. I’ve also been wearing this Post Op Shoe that was provided to me at the hospital. I’m just now getting to the point where I can actually touch my toe without a great deal of pain, however there is still some discomfort. I still can’t put a shoe on the foot without pain though. Hopefully in the next week or so, the skin will heal over and allow me to do so. They say that it’s likely to take 9-12 months for the toenail to grow back completely. That’s a long time maaaaaaaaaaaan. I do have this little toe cover (looks like a skullcap for a toe) that I’ll wear for the next few weeks because it’s going to be sensitive to the touch for a while. For now, I’ve accepted the nicknames that people have branded me with. I’ve heard Hop-A-Long a few times and one guy at the job had the nerve to do a James Brown dance and holler out “Get on the good foot”. That’s aiiiight though, I’m aware of my uncoordinated self and accepted it back when I was a teenager. See The Can’t Dance Kid. I’m just hoping that this thing heals fast. Trying to take showers with a Ziploc bag or rubber glove on my foot is getting tiresome… lol.

Moral of the story is… If you’re clumsy, don’t walk outside barefoot.

12 thoughts on “Misadventures of Klutzy McKlutz”