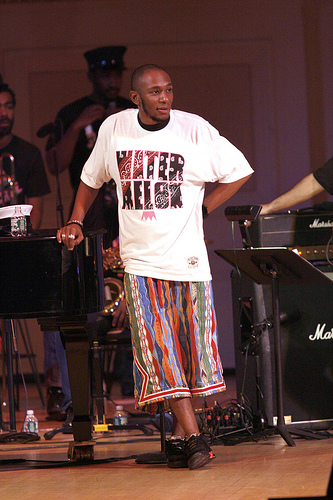 Had the opportunity to check out Mos Def last night at the Kennedy Center. Yeah, that’s right… the Kennedy Center. DC Metro folks know that the Kennedy Center is not a typical venue where you’d expect to see a rap concert. You’re more likely to catch an orchestra performance or an opera there. However if you’re not aware, Mos Def is one of hip-hop’s most introspective and insightful artists. The performance last night showed just how talented the brother really is. He came to town with his big band Amino Alkaline Orchestra – The Watermelon Syndicate and they rocked the Kennedy Center from start to finish. Mos was backed up by the RCDC Experiment comprised of keyboardist Robert Glasper, saxophonist Casey Benjamin, bassist Derrick Hodge and drummer Chris Dave. This is the fourth time I’ve seen this dude perform. Back in ’99 (I think) for Howard U’s homecoming, 2 years ago at the 9:30 Club with Talib Kweli, Jean Grae and Pharoahe Monch on the Breed Love Odyssey Tour and just this past July at the Rock The Bells Festival. However last night was truly one of the best overall. 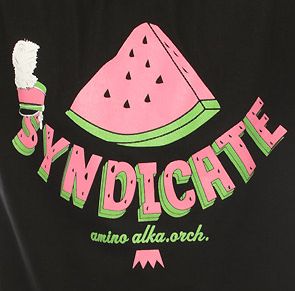 My man put on a show, ya hear? The versatility that he displayed was incredible. I mean, I know dude was a great hip-hop artist and could sing, but he expanded upon that. The show opened his band 25+ piece band (horns, keyboards, guitar, drums, strings, and DJ Preservation) hitting the stage while a video was shown on the screen. It was that of Petey Greene eating watermelon. If you’ve never seen this clip, you’re missing out.

The show was a mix of hip hop, jazz, and R&B. Imagine hearing a live band hit cuts like Ghostface’s “Iron Man”, Isaac Hayes “Walk On By”, De La Soul’s “Stakes Is High” and for my Go-Go folks he hit JYB’s “Sardines”. If you’ve attended a Mos Def show, you know he almost always does his version of the Star Spangled Banner. Yep, he did it again last night. The highlight of the night might’ve been when he did BBD’s Poison. When Mos started singing that joint, the crowd went wild. Hell, I was amped myself. I’m telling you, his live jazzed up version was off the chains! Click here to listen to Mos Def’s Poison

As always you got a few unruly Negroes in the crowd. Folks yelling from balconies and what not. Now, I’m not sure if that part was staged though. Tyler Perry does that during his plays where things appear to be random, then when you talk to someone else about a play they went to, the exact same thing occurred. When I checked reviews from Mos Def’s NYC show at Carnegie Hall in June, there were some comments about folks hollering too. Regardless, it was still funny. It’s real easy for the man on the mic to shut em up.

Now, for a good part of the show this chic (who came late) right behind us was making a rack of noise. She was sitting down and dancing in her seat, the bangles on her wrist sounded like a damn tambourine and on occasion when she talked, the raspy-ness of her voice was slightly irritating to my ears. Then when Mos hollered something bout Chicago, she got all hyped like he had shouted out Brooklyn. It was dark, but as Black folks tend to do when someone is kciking their seat in the movies, I peeped back for a second to give the “ummmm… can you chill look” and then turned back around. They took a 15 minute intermission and the house lights went up.

Right before the second half of the show began, she was talking to the girl next to her and would not shut up. I couldn’t help but to listen ya know. I heard her mention something about paparazzi and there needing to be some kind of law against what they’re doing. At this point I figured I’d turn around to see who this fool was. Maaaaaaaaaaaaan, if it wasn’t Michelle from Destiny’s Child with her skinny tail.

If you don’t know who Michelle is, she’s the other girl on stage with Kelly and Beyonce. Just as a refresher, here’s a GIF of when she fell on 106 & Park. A classic moment on live TV if I may say so myself.

Anyway, back to the show. I couldn’t figure out for the life of me why she was talkin’ bout some paparazzi??? Obviously she was at the show sitting behind me and my wife (with no security or bouncers) and I didn’t hear one person say a thing or see anyone come up to her the entire night. I don’t even think the folks in her row knew who she was.

Now, the ghetto G. Mo would’ve pulled out the camera phone with the quickness and snapped a pic, just to piss her off. But I had to remember where I was and who I was with and kept it chill. I just made brief eye contact with her, gave a smirk and turned back around without incident. I mentioned it to my wife and basically said “If that aint Michelle behind us making all that noise, she’s got a twin sister”. The show proceeded, she continued to party, but the wife and I enjoyed the show without major interruption. Now, explain to me why Michelle jetted out during Mos Def’s finale, like someone was gonna ask her for an autograph when the lights came back up.

EDIT: 20 minutes after I initially posted this entry, I did some Googling and look at what I found. Sorry Michelle, I guess you were right about the paparazzi. LOL

Of course, Mos finished up with “Umi Says”. But not before he asked the projectionist “Can I please see Mr. President” and a picture of Barack Obama hit the screen to thunderous applause from the crowd. The brother definitely is skilled in his craft. He was out there having a lot of fun and we partied right there with him. 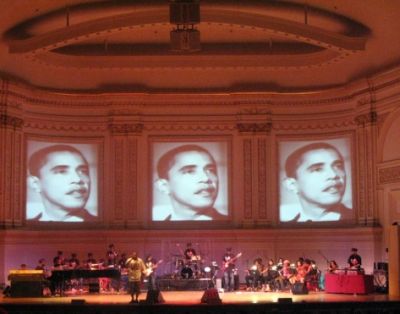 Here’s a recent interview done with Mos Def as he discusses the Amino Alkaline Orchestra – The Watermelon SyndicateAs my man Mos Def finished up the show, he took a lap around the Kennedy Center auditorium like he was being introduced at an NBA All-Star game. So you know as my man came down my aisle, I had to dap him up. The performance he gave was incredible.