Since it’s snowing like crazy outside it’s not like I’m goin’ anywhere. At this point I’m hoping that it stops real soon cuz I’mma have a lotta work to do to clean my car whenever I do decide to roll outta here. I’m tired of surfing the net and watching ESPN so what else is there to do?

I started digging in plastic storage bins under my bed in search of my favorite movie. I know that it’s in here somewhere and I’m determined to find that VHS tape if it takes me forever. The problem that I have when looking for tapes is that I never label anything. So I go through the ritual of popping in tape after tape after tape. I got old Def Comedy Jam tapes, some episodes of Living Single, Dallas Cowboys games and of course those vintage NahLaterz home movies. I had gone through about 40 or so (out of about 120) VHS tapes when I came across the one thing that I had been looking for… Moving starring Richard Pryor. Now one may think “He went through all that trouble for that???” and I’ll tell ya “Ya damn skippy I did!” I’ve loved that movie since it first came out in 1988. I was 16 at the time and I used to sit in the house and watch it over and over and over again. I loved that movie so much that I made VHS dubs for all of my friends. Really, Moving is my all time favorite comedy. 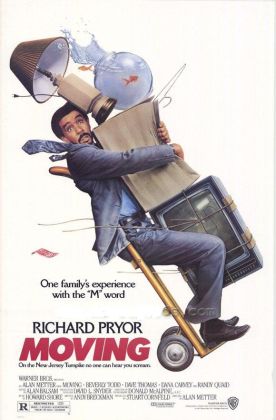 Richard Pryor does a fabulous job as Arlo Pear, the ultimate victim of cruel and unfortunate circumstances. He lives with his wife Monica, his daughter Casey and his twin sons Randy and Marshall in New Jersey. He’s a transportation engineer who ends up getting laid off. One day, Arlo receives a decent job offer from a transit company. The job sounded great, except it was in Boise, Idaho. Randy Quaid is humorous in two roles as the psychotic neighbor(s) Frank and Cornell Crawford who constantly hound Pear by cutting the grass with a gigantic lawn mower tractor. A very young looking Stacey Dash plays their teenage daughter Casey, who pulls pranks in attempt to keep them from moving to Boise. If I recall she had blue eyes in this movie… still tryna figure that one out. *scratches head* Anyway……. Eventually she runs off to get married to Rudy played by Morris Day. If you’ve seen this flick you’ll remember that former WWF wrestler King Kong Bundy was one of the movers named Gorgo. Dana Carvey is also great as Brad Williams, the man with multiple personalities. When the Pear’s arrive at their new house in Idaho, they find it half empty. It’s missing the stairs, the kitchen, doors and pool. To make things worse, the movers just happened to have taken a wrong turn and end up in New Orleans for Mardi Gras. Pear goes on a rampage to get his stuff back from the movers and engages in a showdown. This is prolly one of the funniest scenes that I can recall watching. He was doing stuff to those moving cats that would put Steven Seagal, Jean Claude Van Damme and Jet Li to shame. He was straight kickin’ azz and takin’ names!!! There’s one quote that I will never forget from this movie. When he came home with all their furniture, he hollered to his wife “Look honey, I found our shit. I brought our shit home. This is our shit!” I dunno why I laugh so hard everytime I hear him say that, but it’s embedded in my brain like the Gettysburg Address.

If you love comedies, Moving is just one of those movies you gotta have for your collection. I actually found a website that still has a link to the trailer for the movie. Moving starring Richard Pryor

One thought on “My Favorite Movie”