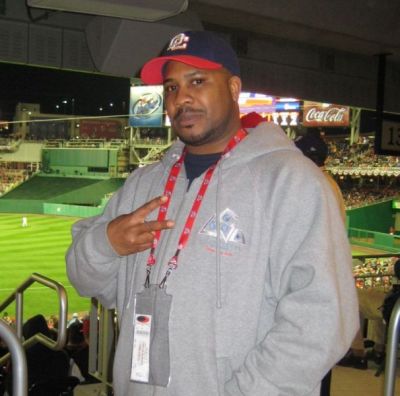 Now it should go without saying that I was gonna be up in the house for this event. The first ever Nats game at the new stadium? No doubt about it baby! I was at the first ever Nats baseball game played at RFK when the team moved from Montreal. In fact, I even blogged about it 3 years ago. Let’s make one thing clear for starters, I’ll root for the Nats when they play cuz DC hasn’t had a team since forever. But my heart is and always will be with my squad… the NY Mets. Blame that one on grandma is NY aiiiight. When you’re a kid chillin’ in the kitchen and grandma is baking cookies and watching the Mets on TV, you’re gonna be a fan of the Mets. Point blank. For some reason she never liked the Yankess, and thus I hate em til this day. Anyway, when the Nats play my squad, I’ll don my Mets gear. 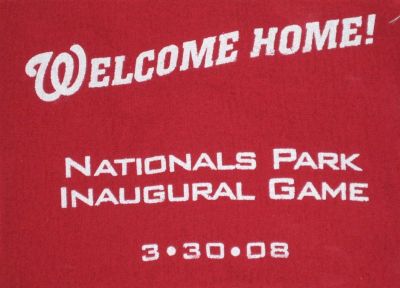 I’d say over the course of the past month, I’ve had a minimum of 20 reasonable offers to sell my 4 tickets. But I’m a sentimental dude and I enjoy being part of historic sporting events. Plus, I really wanted my wife, my mom and her husband (who’s a die hard Red Sox fan) to come along and enjoy the game as well. So I rejected the easy payday and went full throttle with my plans to attend the opening game at the new park. I had driven in the area of South Capitol Street where the stadium was a few weeks back and was amazed at just how different the area looked. I mean, if you know anything about that location in DC you know that it wasn’t exactly somewhere you wanted to be at late at night by yourself. They had completely revitalized the area and it looked real nice. Gone were all the late night spots me and the crew had frequented for years. No more Club 55, no more Mirage Nightclub, no more Nation. They straight transformed everything over there to a spot where it actually looked and felt comfortable. I’m definitely looking forward to seeing what restaurants, hotels and other entertainments venues go up in that area. 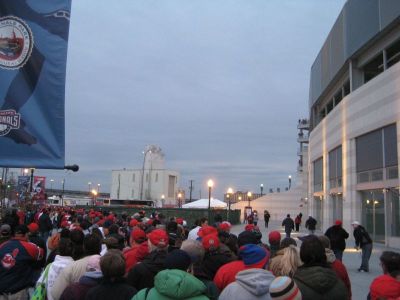 Anyway, back to the home opener. We heard a report earlier in the week that good ole George Dubbya was going to be at the stadium to toss out the first pitch around 8:10. Being that I was at the first game at RFK, I knew that mean that Secret Service was gonna be in fulle effect and that lines would be tremendously long. So we got our gameplan together and decided to catch the Metro Green Line to the game. We left the Greenbelt station around 6 and got to the stadium around 6:35 or so. The ride was smooth and although there were a lot of people, everything flowed smoothly. Once we arrived on stadium grounds, the next 90 minutes from that point were pure hell!!!! It wasn’t exactly warm outside aiiiight. It was in the low 40’s and jive windy. We stood out there in this slow line and waited outside the First Base Gate entrance. There wasn’t much to do so I was using my cell phone to check the score of the Kansas-Davidson game and was giving updates about every 5 minutes. After the conclusion of that game, all there was to talk about was the stupid long lines. 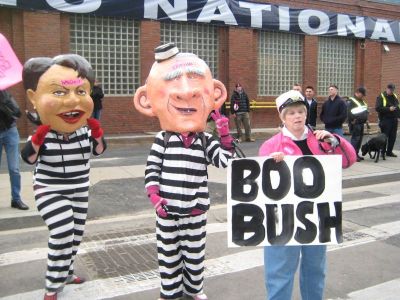 I think the majority of us out there vowed to boo George Dubbya the minute he stepped onto the field. That was of course prefaced with an ‘if’. That ‘if’ was based upon us actually getting into the stadium to hear the Star Spangled Banner and to see the first pitch. Folks were getting irritated. The wife was getting annoyed by folks talking loud behind her and stepping on her feet. I was getting angry at the dude in front of us smoking a cigar. Mom walked ahead to scout the end of the line and saw no end in sight. It was crazy. There weren’t exactly a lot of ‘us’ out there ya know? Black folks and baseball don’t really go hand in hand. I mean, I love baseball, but a quick glance at the surroundings in DC and you’d a thought we were in Boston. Anwyay, we began to hear player intros and announcements around 7:50. The chorus of us outside began to boo loudly. Finally around 8:03, we got in. What a sigh of relief. 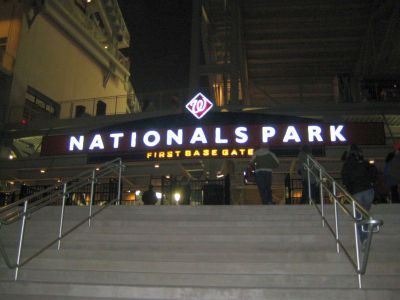 We ran… ooooops, I ran down the concourse and kinda left my wife, mom and her husband in the dust. I didn’t mean to, but the adrenaline was kinda pumping through me at that point. We found our seats and were able to catch the last of the player intros for the Nats. Soon thereafter we were graced by the National Anthem sung by Denyce Graves. Let me tell you something right now. That sistah can SING!!!! I saw her in a performance my Junior year at Howard University’s Rankin Chapel and I’ll never forget it. Her voice is amazing. When she sang last night, it gave me goosebumps fa real. Once she was complete the fireworks went off and what not and it was time for first pitch. I had my hands cupped ready to boo as loud as ever. You think I didn’t? The minute they introduced George Dubbya to the crowd, all I heard was boos. Thus, I wasn’t the only one slightly irritated by his appearance, the long wait we had outside and all the ridiculous things he’s done since being in the big chair. In fact, the moment was captured by ESPN. Tell me those were not boos. The media are cowards. They never even mentioned that they booed the hell out of that man. Don’t be surprised if the clip I append below is not on YouTube in a few hours. You might get that “this clip was removed” message.

Edit: April 4 – Well, I was correct. The first clip was removed from YouTube. Let’s give Daily Motion a shot.

So after the field cleared from those not playing in the game, it all began. From the first pitch I was locked in. Well, kinda. Of course runs had to be made to the restroom, to Boardwalk Fries, to Slide Down the Line, etc. But I was not about to stand in the line for Ben’s Chili Bowl. Good gracious was it long! I mean, not a single brotha in sight either. The wait had to have been at least an hour. Hell, I stood in line for about 20 minutes tryin’ to get some fries. Those folks were serious about their chili dawgs and burgers last night. I work not too far from Ben’s, I can visit them on my lunch hour if need be. Sat back down for most of the game, but with the Nats up 2-1 in the 8th, the wife and I took a walk around the stadium. That’s one real nice ballpark indeed. I can’t think of anything they didn’t have…. besides more of ‘us’…. lol. I’m talkin’ a every food place you can imagine, a playground for kids, a Playstation arcade, a Build-A-Bear (or Build-A-Screech for those kids who like the Nats mascot), batting cages, pitching cages and a rack of other stuff I can’t remember. 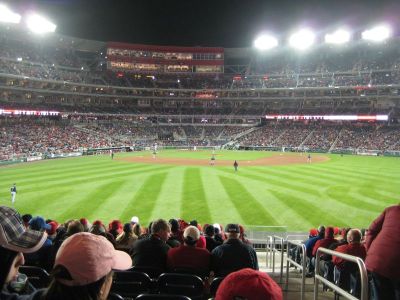 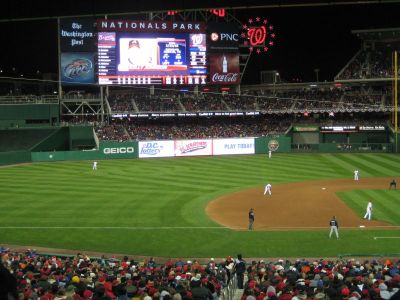 You know I took a ‘few’ pics along the way. We sat back down at the top of the 9th and figured the game would soon be over. Wrong. Nats pitcher Rouse threw a bad pitch and allowed Braves First Baseman Mark Texeira to score from 3rd. So then we had to go to the bottom of the 9th inning with a tie game. Lord knows we didn’t want to stay for extra innings. Well, Ryan Zimmerman took care of that with a two out, walk-off homerun to win the game. Talk about folks in pandemonium up in that place. First game in a new ballpark and it ends with an amazing homerun in the bottom of the 9th inning. It doesn’t get any better than that. I even took out the camera and captured a portion of the celebration. I didn’t get the homerun itself, but I did get Zimmerman rounding 3rd base and coming home to all his teammates.

Awesome night of baseball and the start of many trip to catch the Nats this season. Of course, most of those will be to see the Mets. But on days when I have nothing to do on the way home, I might as well stop by and catch a few games. That’s one good part of working downtown DC.

You can click here to see more of my photos from Opening Day if you like. Includes a few more pics from our day, as well as me being simple as usual… lol.

Also, here’s a link to some pics of how the area of SE DC around the stadium used to look and how it looks now.

So as baseball begins, I wanna know who your favorite teams are and if you have any memorable moments from games you’ve attended.

5 thoughts on “Opening Day at the new Nationals Stadium”