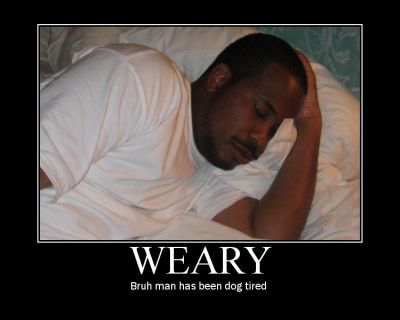 I can’t front. The past 6 weeks or has been real trying for me. I’m exhausted. I feel like I’ve aged 20 years in the past 2 months. I’m starting to get flare ups in my neck and back from the car accident in January and the insurance company is not being very cooperative. Thus me giving my attorney’s the green light to file suit. No amount of money will make the pain away, but the offer the insurance company gave me was ridiculous!!! I went to a lotta therapy just to try and get right ya know? Then for some reason my right knee has been swelling and aching the past couple of weeks. It was painful enough for me end up at the doc getting x-rays last week and a subsequent MRI on it earlier this week. When you endure physical pain, it tends to affect the mental as well. I’ve been quite frustrated with how my body is feeling. With the aches and pains, I’ve not been able to exercise as I would like to. Thus, significant weight gain that I don’t like at all. Let me not neglect the fact that I’ve been working 12+hr days the month of October in handling a number of essential meetings, webcasts and video conferences and haven’t had a day off in 2 weeks. Yeah, the weekends have been a killer. It’s like whenever I get home, I immediately crash. I have little to no energy at all.

However I’ve been encouraged by attending Bible study with my wife the past few weeks. I’ve been fortunate that on those Wednesday’s I’ve been able to get out of the office early enough to make the 7:30pm sessions. This past Wednesday was the first day of the Music & Worship Conference at Reid Temple, thus the usual Bible study was not held. However we were blessed by the music of our usual praise team and female gospel soloist LaRue Howard who came from Orlando, FL.

According to the church bulletin, the sermon was scheduled to be delivered by Tye Tribbett. Now, I’ll be honest. I didn’t know much about Tye Tribbett. I was aware that the brother was a gospel music singer and that was about it. When I had heard the previous week that he would be in the house, I assumed that he was going to be performing with his group Greater Anointing. To be totally honest, I was somewhat intrigued. Not in a negative aspect, but just wondering how what kind of sermon he would be delivering.

Let me say this… the brother was very inspirational in his sermon. I mean, I was really digging everything he said. Not only that, but the man has crazy energy. It’s easy to jump and run across the stage when you’re singing, but I don’t think I’ve ever seen anyone preach with such excitement and expression. There was one topic he discussed that really hit home for me. He discussed how sin isn’t necessarily the primary thing affecting us these days. The spirit of weariness is affecting us just as much. That spirit of weariness is working its way into our lives through all the pressure and bad news that surrounds us. It’s working to get our eyes off the Word of God by bombarding us with negative forces. It’s trying to get us to look down at defeat instead of up at Jesus. Now I’m not one of those radical or ‘churchy’ type folks. Lord knows I struggle with life challenges like everyone else. We won’t get into specifics on those things alright. I do however believe in God and the growth in my own life over the past 3 years since returning to church regularly.

Looking at life in terms of a sporting event, I always knew my opponent was no longer dangerous when I saw his head down. He was easily defeated when all his confidence was lost. Lately, I’ve been my own worst enemy. I’ve allowed a lot of factors to get me down. Yes, I’m dealing with some issues but I’m still blessed to be where I am. I’m grateful to have a loving wife, wonderful family, a good job, a roof over my head, a luxury ride, etc. I’m doing my best to wake-up smiling. It’s not easy when times are rough though. But I’m certain of one thing, I’m going to overcome this spirit of weariness. I’m going to focus more on positive things more than the negative. I’m going to be more disciplined in following goals I have set forth and I’m going to “snap out of it” as Tye Tribbett said the other night. I had originally written this entry and saved it as a draft earlier in the week. The title at the time was Aches & Pains. The Lord showed me Wednesday night through that powerful message that I gotta get up and stop complaining about everything.

The other thing that occurred that has awakened me, has been the health of my grandma is NY. Grandma is not only back home after being in the hospital in August, but she’s doing well. Let me correct that, in her words “I’m doing great!!!”. I’m greatly encouraged at the fact that her health has improved and she’s back home. This is another thing that says to me to stop wallowing in the sadness and depression.

My favorite Bible verse since I was a kid has always been Proverbs 3:5,6 – Trust in the LORD with all thine heart; and lean not unto thine own understanding. In all thy ways acknowledge him, and he shall direct thy paths. Continue to pray for a brotha.

5 thoughts on “Overcoming The Spirit Of Weariness”