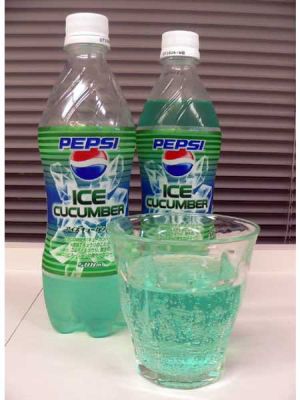 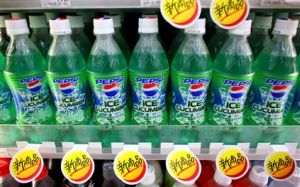 I’ve always been a fan of Pepsi over Coke and although I don’t tend to drink soda too often, I still grab one ere’ once in a while. I still remember when Crystal Pepsi came out in the early 90’s and I was a fan of it I suppose. I mean, it was actually pretty good and I diggin’ the lemon lime flavor. But less than 2 years later, it was gone. Obviously most folks didn’t like it… or should I say those folks with money who matter.

Since then, Pepsi hasn’t really created anything that I’ve liked that you would consider out of the ordinary. Pepsi Blue that came out around 2002 was just nasty. It tasted like raspberry Robitussin to me. But yet, I tried it.

I’ve taken a few swigs of Pepsi Twist (the lemon infused one), Pepsi Vanilla & Pepsi Lime. But none of these were anything that I would’ve gone out of my way to actually purchase regularly. I’ve purposely avoided the Pepsi Jazz Black Cherry French Vanilla & the Pepsi Jazz Strawberries & Cream that came on the scene about 2 years ago. Both sound nasty and I won’t even waste my time.

Now comes Pepsi with something that I can’t even fathom to be honest, Pepsi Ice Cucumber. At first I’m thinking to myself “This is some kind of Photoshop thing someone emailed me”, but nope it’s real. All I can say is “yuuuuuuuuuuuuuuuuck!!!!”. What is this, some kinda of joint venture with Bath & Body Works for the summer? Should we expect a Pepsi Cucumber Melon on our shelves soon? The concept is kind of crazy, but at least it’s not being released here. After reading a few beverage blogs, I’ve realized that people are actually bidding on bottles of this stuff on eBay. I mean, am I the weird one cuz I don’t wish to indulge in this nastiness. I’m always game to try something once, but I dunno about this one. Hell, I at least wanna try and get a bottle of something I can mix this up with. What happened to the good ole days of just plain Pepsi I could mix with some rum? I suppose Cucumber Ice Martinis are what’s on tap for the summer.

What do you think? Does this sound good to you????