Now you know I’mma be biased in my review of the play right??? Okay then, as long as that’s understood. The play itself was very well done. The actors and the choreography was excellent. Now I did have a major problem with the sound though. Being that I’m a audio-visual technician, I tend to get really bothered when I attend events and the sound is crappy. I’ve been doing A/V work since I was 12 years old. Yes, I was the kid sitting in the back of the church with the headphones on assisting with the recording of the pastor’s sermon. I was the kid making copies of the gospel concert for the Tape Ministry. I’ve worked in many environments and have been doing sound for over 20 years. I have my Bachelor’s degree in Radio Production from Howard University and it was well earned. Anyway, enough about my skills, let me get back to what I was saying.

In the case of The Wiz this past weekend, the sound was terrible!!!! Only the major characters wore lavaliere microphones and therefore anyone else who spoke could barely be heard. This led to a li’ bit of confusion because only the people in the first 5 rows or so could heard everything. I was sitting in 8th row on the right side and could barely hear when lines were spoken by those who’s voices were not amplified. The sound technicians who ran the show didn’t have a clue as to what they were supposed to do. It was obvious that they didn’t have a script back at the sound booth. At times when the main characters spoke, you would miss the first few words they spoke because their microphone was not open on the mixing board. A few times I was ready to jump up, walk back to the booth and offer my professional assistance. Call me whatever you want, but I cannot stand to go to any event and the sound is jacked up. It drives me nuts!!!! It could be church, a concert, the club, any live event that utilizes a sound technician.

Back to the reason I attended the play… my baby sister. She did a remarkable job in the role(s) that she played. Yes, that is plural. She had numerous roles. She was a crow, a winkie, a poppy, a gatekeeper and a citizen of OZ. I looked at my mom during the play a few times as if to say “she’s doing something else?” I knew that she wasn’t in any of the lead roles, but she still shined in all the scenes that she acted in. She’s been singing and acting ever since I can remember, probably since she was about 8 years old. She’s a very talented young lady and I love her with the greatest love only a big brother can have. I only want the best for my sister. I will do whatever I can as she goes forward in pursuing a degree in the Fine Arts, whether that be music, theatre or a combination of both. 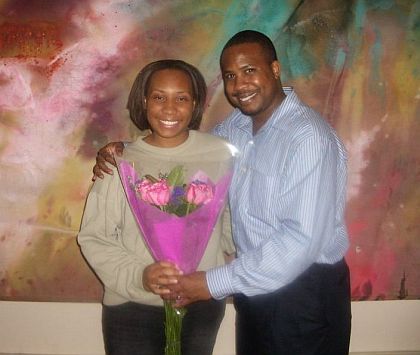 Being the oldest allows me to act a fool anytime I feel like it
(especially when I’m the one taking the self portrait) Ha! Ha!