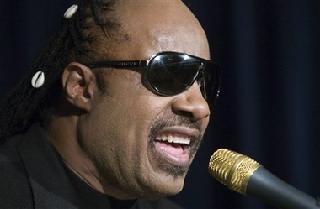 I don’t even know where to start. I don’t think I realized just how much of a fan I was til last night. That brotha was incredible!!! From the time the wife and I entered the sold-out Verizon Center with 10,00 strong, the air in the place was full of energy. Now you know Black folks don’t start nothin’ on time, but that’s aiiight. Around 8:30 or so, Stevie hit the stage along with his daughter Aisha Morris. For the next 2 1/2 hours I was big kid up in there. Well, in actuality my wife was the one who was really gettin’ her groove on. She was singing songs I hadn’t even heard of. I realized that I wasn’t alone as a majority of those around us were rather quiet as she recited word for word as Mr. Wonder did his thing on stage.

I swear to you, at a point last night I said to myself “There’s no way that this brotha is blind”. As far as the best concerts I’ve ever been to in my life, this is definitely a tie with Prince for #1. I was surprised to find that he’s also a real funny cat, as he would joke with the crowd from time to time during the performance. From singing to playing the keyboard to the harmonica, he was jammin’. He also laughed and smiled a great deal druing the entire night. At one point during the show he even got onto piano and stood up. I’m tellin’ ya, he was doing it. I was reminiscing as I sat in my seat doing what I do. Being that I can’t dance too well, I’m what you’d call a Wallflower Headbobber. That means, I be feeling the beat and ‘dance’ in my own way… but most folks will call me a stiff. So what if I didn’t get up and gyrate like 90% of the folks in there. I still had a good ole’ time. There was no need for gimmicks or wild stage sets and pyrotechnics. The basic stage with the white curtain was good enough. Here’s the list of songs I recall that he did.

Love’s in Need of Love Today
Living for the City
Too High
Visions
Master Blaster
Higher Ground
Golden Lady
Ribbon in the Sky
Overjoyed
If it’s Magic
You and I
Superstitious
How Will I Know
All I do
(Uptight) Everything is Alright
Hey Hey Hey
For Once in My Life
Don’t You Worry Bout a Thing
Signed, Sealed, Delivered
My Cherie Amour
You Can Feel It All Over
I wish
Boogie on Reggae Woman
Do I Do
You are the Sunshine of My Life
Always

He also did small snippet renditions of Billie Jean and I Heard It Through The Grapevine as well as bellowing out J. Holiday’s “Put You to Bed” on occasion as he was talkin’ bout taking care of the ladies. He paused for moments where he discussed the fact that he decided on his first tour in 12 years after losing his mother in May of 2006. The long version of “Ribbon in the Sky.” really got the audience involved as he had both the ladies and fellas up in there singing… yeah, me too. Halfway though “Visions”, he sort of transformed into a preaching spirit when he hollered out “How can you say you love God and seek destruction of anybody?. War is not the solution. Peace is the only answer.”. But what might be the most memorable moment as far as his speeches go. At the end of the night when he was talkin’ bout peace and positive things, he also addressed the haters. My man Stevie said “If you’re a hater, just die and go to hell”. That right there shocked folks, but also rendered thunderous applause.

To say that the show was simply amazing is a gross understatement. But in order to really understand how tongue tied I am at describing his performance, you gotta go yourself. Make sure not to miss him when he’s in your area.