So with the new job and all I had to make some travel adjustments. My original plan was to go visit my pops and grandparents in Charlotte for a few days the week of the 18th, but I agreed to start the new gig on that date. I manueuvered my flights and had them moved up to this past weekend where I hopped on a plane Saturday afternoon. The whole new security measures with this 311 nonsense forced me to check my bag, something I never do. But with liquids (colognes, lotions, etc) in my duffle I couldn’t carry it onto the plane. I got into Charlotte around 5 that afternoon, called my fiancee to let her know I had arrived safely and then jumped on a shuttle to where the rental cars were. That’s when the fun began.

I had already reserved a rental car through Alamo and all I had to do was go to the lot, pick a car I liked and drive to the front gate to verify. I took a quick look and decided upon a Saturn Aura. Now, I’ve never driven a Saturn in my life, but this car was kinda souped up and it had leather and woodgrain. I hopped in it, toss my bag and briefcase in the back, popped in the new Mos Def and headed to the gate. When I got there the attendant told me that the car had maintenance issues and that I needed to select another car. Maintenance issues???? Why was it on the lot then??? Anyway, the brotha was real cool and said he’d upgrade me to anything I wanted on the lot, even an SUV it I wanted it. I didn’t need a gas guzzling truck, so I selected an silver Impala. Went through the same routine as I did with the Saturn and headed to the gate. As I arrived there, a red indicator flashed which read “check right front tire pressure”. I asked dude about it and again he said I should select another car. I sighed and looked at him as if to say “Bruh… you can’t be serious???” He told me to hold on a sec and he left the booth running into a lot for employees only. Shortly thereafter he swerved up in a white Impala with bass booming from the inside. The door opened and he said to me “This is the best car on the lot, it’s got XM radio, the hot system and it’s really really fast”. So you know what I did, I jumped in it and started my journey down 85.

I got to my grandparents house and I had just made it in time as they were all dressed up, leaving out the house to attend a dinner function. They each gave me a quick hug and said they’d see me in the morning. I scooped up pops and headed to his crib. We weren’t there more than 2 hours and he was getting ready for bed. Time for Plan B. I called a handful of my cousins, but they were all bunned up with their ladies and made excuses why they couldn’t come out. So I did the next best thing, went to Picasso’s sports bar. I wanted to see the Winky Wright fight anyway and since pops didn’t have cable, I had to go somewhere. After arriving at Picasso’s, I called my cousins back along with a few of my partners who live in Charlotte and told them where I was. I sat down at a table by myself, ordered some wings and a salad and watched the college football games that they had on the screen. There were a lot of students from Charlotte in there watching their game vs Indiana, but after the Hoosiers whipped their squad, a lot of them rolled out. By the time the fight came on, a few of my folks swung through to kick it with me. We sat there for a few hours talking and what not and then I rolled back to pops crib.

For the next 24 hrs I spent a good amount of time with pops and the grandfolks. Grandma hooked up breakfast in a BIG way. I’m talkin bout that good ole’ grits, eggs and biscuits breakfast. I was halfway sleep when the football game came on. We sat there and looked at football most of the day Sunday and of course you know a brotha was real happy with the Cowboys victory over the NY Midgets that afternoon. Spent a good amount of time talking to my grandfolks and filling them in on my life and what was going on. Being that neither them nor pops had met my fiancee, I had to pull out the sheets of pictures that I had printed off the computer shortly before I left MD. Most of them were of my fiancee and I, but I also had some pics of my nieces and a few of my brother and sister as well. I still had some pics from Thanksgiving on my camera and I showed them those as well. We all talked for a while and I assured all of them that I was aware of the steps that I needed to be happy this go round. Their only concern was that what happened in my first marriage, didn’t occur again. I understood everything they were saying and truly appreciated their love and concern. They didn’t want me to get hurt again and on the short end of the infidelity stick like before. I’m more focused spiritually now and have no doubt in my mind that the woman in my life today, is the one who will be there tomorrow and from this point forward.

So me and pops leave from my grandfolks house, grab a pizza from Pizza Hut and then hit the Harris Teeter. Yo… do you know what I found in that store??? I found some Vernors Ginger Soda.

For those who don’t know, this just might be the best soda on earth. It’s similar to ginger ale, but it has a strong ginger taste with hints of vanilla. You know I brought back a 6 pack from Charlotte on the plane cuz I can’t find it in the DC area anywhere… I don’t understand why stores in this area don’t carry it. I used to be able to find it, but can’t anymore. Been drinkin’ it since I was a kid and it’s like dat!!!! Pops and I tore that ‘veggie lovers’ pizza up. Ummmmm… there’s a story I wrote a short time ago about pops being a vegetarian and all entitled I’d like two Whoppers… hold the meat and it’s kinda funny… read it at your leisure.

Next morning we got up, ran errands around town and I prepared to make my departure back to the DC area. After years and years of inquiring, Grandma did something I never thought she’d do. She finally gave me the recipe for her pistachio cake. Yeah, it’s green, take a look.

I’m telling you that this is the best cake I’ve ever had in my life. I had to promise her that I would not share the recipe, so sorry folks you’ll just have to imagine how good it is… or when I bake it, I’ll FedEx you some. She gave me half the cake that she had baked for me and I quickly wrapped it up in aluminum foil. I took a few pics with the folks, gave em hugs and kisses and hopped in the rental. I don’t see them as often as I should and I really enjoyed spending time with them for a few days. As I was driving towards 85 on my way to the airport, what do I see??? It’s a Mickey Deez with a huge sign that reads McRib Farewell Tour II.

I almost crashed that Impala trying to get over there. You know how long it’s been since I had a McRib sammich??? It had to at least been close to 10 years. So, I rolled up to the drive thru, ordered one and continued on to the airport. While tuning stations on XM, I came upon one that was playing Jay-Z’s “Feelin’ It”. That’s one of my favorite songs off the Reasonable Doubt album and I cranked the volume and bass to levels that would probably cause folks to cringe and hold their ears. I turned the car in, hopped the shuttle to the terminal and sat there eating my McRib sammich. I’m telling you… it was hittin’!!!! 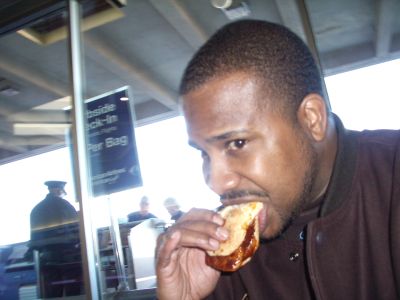 Shortly thereafter, I went through the whole security thing, caught my flight and arrived safely back at BWI. It was a good weekend. I enjoyed spending time with my folks. I must do it again real soon. For those out there who’ve got parents, grandparents and family members that you don’t see too often because they’re in other states, take time to go see them. I love them much and my life is always enriched when I spend time with them. We never know just how much longer they’ll be here. Tomorrow is not promised. Next stop… NYC to see my other grandma.

15 thoughts on “To Carolina and back”